​Will Indian IT and pharma firms be in Donald Trump’s crosshairs? 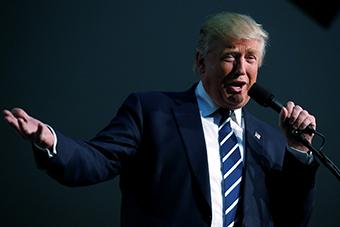 Indian information technology and pharmaceutical companies, which get a significant portion of their revenue from the US, could face some trouble under the presidency of Donald Trump.

Trump, who takes office on 20 January, had targeted Indian IT companies for what he said "stealing American jobs" and has promised to create employment opportunities locally.

Tata Consultancy Services Ltd, Infosys Ltd and Wipro Ltd are the major Indian IT companies with operations in the US. Sun Pharmaceutical Industries Ltd, Dr Reddy's Laboratories Ltd and Glenmark Pharmaceuticals Ltd are among the drugmakers with significant exposure to the US.

During a press conference on Wednesday, the US president-elect said that pharmaceutical companies were “getting away with murder” when it came to drug pricing and said that he will change it.

“Pharma has a lot of lobbies, a lot of lobbyists, a lot of power,” Trump said, according to an Agence France-Presse (AFP) report. “Our drug industry has been disastrous. They’re leaving left and right. They supply our drugs but they don’t make them here, to a large extent,” he said.

He also said that the US is the largest buyer of drugs in the world, "and yet, we do not bid properly”. He added that US companies will begin bidding for contracts and save billions over time.

Another Trump policy that may impact the Indian pharmaceutical industry is the replacement of the US Patient Protection and Affordable Care Act, or ‘Obamacare’, which was the flagship health insurance policy championed by outgoing US president Barack Obama. Trump has vowed to repeal and replace Obamacare.

Trump has also said that the US will have a stricter policy regime for H1B visas. A pending legislation in the US Congress aims to raise the minimum salary benchmark for an H1B visa from $60,000 at present to $100,000.

“It’s simply wrong to think that we’re in a totally open world and that any American with a job can be replaced if somebody in the world is willing to take a job for less pay,” the Press Trust of India cited Sessions as telling members of the US Senate Judiciary Committee during his confirmation hearing for the position of US Attorney General. “We have borders. We have a commitment to our citizens.”