Many people equate spending on R&D with investing in innovation. The logic goes that R&D spending is lab spending, and out of labs come innovations. Hence, those that spend a lot on R&D are innovative.

That is faulty logic.

This chart shows R&D spending from the top 20 companies in 2011: 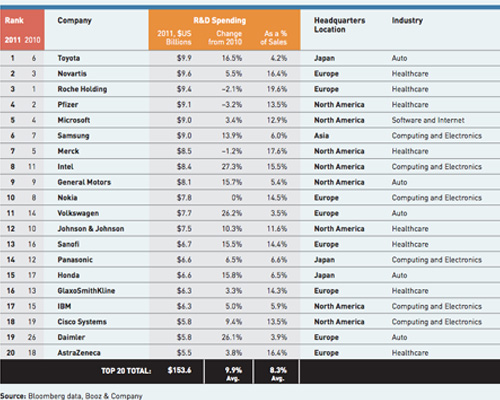 Think of your own list of companies that are providing innovations which change your work, or life. Would you include Apple? Amazon? Facebook? Google? Genentech? (Here's the link to Fast Company's 50 most innovative for 2012). Note that none of these companies appear on the list of top R&D spenders.

On the other hand, as you look at the big spender list some things might be apparent:

Microsoft is #5, spending $9B and nearly 13% of revenue. Yet, for this money in 2012 the world received updates to their aging operating system and office automation software. Both of which failed to register favorable reviews by industry gurus, and are considered far from innovative. And Nokia, which is so floundering some consider it a likely bankruptcy candidate soon, is #7! Despite spending nearly $8B on R&D Nokia is now completely reliant on Microsoft if it is to even survive.

Autos make up a big part of the group. Toyota, GM, Volkswagen, Honda and Daimler are all on the list, spending a whopping $36B. Yet, even though they give us improvements nobody considers them (especially GM) very innovative. That award would go to little Tesla Motors. Or maybe Tata Motors in India.

Pharmaceuticals make up the dominant industry. Novartis, Roche, Pfizer, Merck, Johnson & Johnson, Sanofi, GlaxoSmithKline and AstraZeneca are all here - spending a cumulative $54B! Yet, they have all failed to give the world any incredible new drugs, all have profit struggles, and the industry is rife with discussions about weak product pipelines. The future of modern medicine increasingly is shifting to genetic solutions, biologics and more specific alternatives to the historical drug regimes from these aging pharma R&D programs.

Do you see the obvious pattern? Most big R&D spenders are not really seeking innovations. They are spending money on historical programs, following historical patterns and trying to defend and extend the historical business. In other words, they are spending vast sums attempting to sustain (or recapture) historical success. And, as the list shows, largely doing a pretty lousy job of it.

If you were given $10,000 to invest would you select these top 20 R&D spenders - or would you look for other, more innovative companies. From a profitability, rate of return and trend perspective, most of these companies look weak - or downright horrible.

Innovators don't focus on what they spend, but where they spend it.

The companies most known for innovation don't keep spending money year after year on their old business. Instead of digging deeper into what they already know, they invest laterally. They spend money putting the pieces together in new, unique ways. They try to find new solutions to old problems, using new - even fringe - technologies. They try to develop disruptive solutions that actually change the marketplace, rather than trying to make something that already exists better, faster or cheaper.

Lots of people like to think there is "scale" in research. Bigger is better. What's more important, for investors, is that there is "diminishing returns." The more you research an area the more you have to spend to find anything new. The costs keep escalating, as the gains shrink. After investing for a while, continuing to research an area is not a good investment (although it may be very intellectually interesting.)

Most of the companies on this list would be smarter to scrap their existing R&D programs, cut the budget in half (at least,) and then invest it somewhere very different. Instead of looking deeper, they need to look wider - broader. They need to investigate alternative solutions, rather than more of the same. They need to be putting more money on fringe opportunities, and a lot less into the core.

Until they do, few on this list are very good investment bets. You'll do better investing like, and in, the real innovators.