Who are the highest paid executives in India?

The number of directors of public companies who drew a pay packet of over Rs 1 crore last year swelled to over 1,000 for the first time ever as public firms generated sharp improvement in profits.

VCCircle analysis based on Capitaline data shows as many as 1,060 directors of listed firms took home Rs 1 crore ($150,000) or more last year. This shows a breakout as this set has been hovering in the 600-800 bracket for the past many years.

Better earnings in the corporate world coupled with the rise in the stock market allowed the firms to shower a bigger largesse to their top decision makers.

According to an RBI analysis of performance of 2,932 private listed firms during 2015-16, operating profit growth improved considerably due to higher contraction in overall expenditure vis-à-vis sales.

“A noticeable turnaround was recorded in the growth of operating profit and net profit for the manufacturing sector and the IT sector. Net profit margins improved across all sectors,” RBI said in a note early this month.

Besides salary and perks, directors’ remuneration also includes a cut of profits that is paid as a fee.

Stock option is also a factor.

Majority of Indian firms are controlled by promoters, who more often than not, lead their firms and sit on the board and typically do not get stock compensation. But the rise in the stature of professionals, who are not just chief executives but also sit on the board as few promoters take a back seat in day-to-day management, has added to the list of crorepati directors due to employee stock options.

As the Indian bourses climbed to hit an all-time high in March 2015, it gave an incentive to employees holding stock options to convert them into equity and monetise them. Since stock options are offered at a discounted price, companies need to foot the bill of the stock options being exercised against the fair market value, and that is included in the pay packet.

Shiv Agarwal, managing director of headhunting firm ABC Consultants, says, given inflation, more people are coming into the Rs 1 crore plus bucket and that may continue.

“But fixed compensation growth at senior level in India will slow down, as in quite a few cases it is over the top now. People will try to push more towards currency like stock rather than fixed pay,” Agarwal says.

Meanwhile, the list of highest paid executives saw a number of professionals. One in three of the top 20 highest paid directors last financial year were not part of the promoter family or business group. 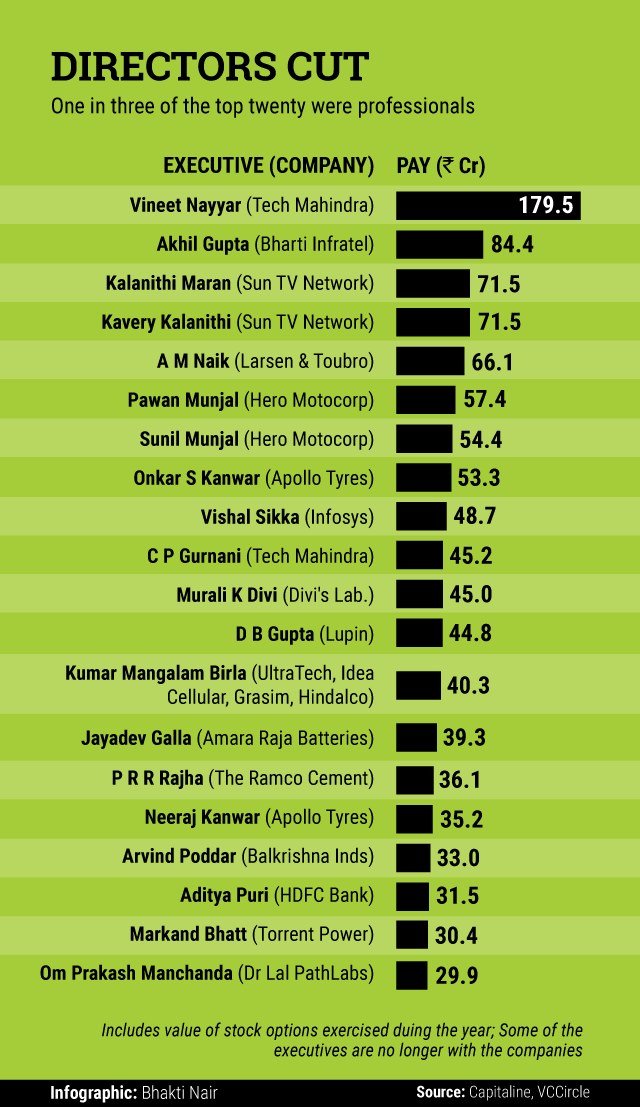 Marans of Sun TV came close to breaking the record for cash compensation for an employee of a listed firm in India set by Jindal Steel & Power Ltd’s chairman Naveen Jindal in 2011-12 when he drew a Rs 73.41 crore package.

But adding the mix of stock options, Vineet Nayyar of Tech Mahindra and Bharti Infratel’s Akhil Gupta topped the charts.

As first reported by VCCircle, Tech Mahindra set an employee compensation record for a listed firm by rewarding its vice chairman Nayyar with a total remuneration of Rs 179.5 crore ($29 million) last financial year. Nayyar is a 77-year-old former IAS officer who switched to the corporate job three decades ago.

Promoters of some firms who have been among the highest paid for several years such as Bharti Airtel’s Sunil Mittal, have dropped out as professionals exercised their stock options to move up. Mittal narrowly missed the top 20 list.

Among those who dropped out of the top charts are Sameer Gahlaut of Indiabulls Group and deceased doyen of Hero Group BM Munjal. Two of his sons, Pawan and Sunil, figured in the top charts. Sunil Munjal has recently stepped down from the board of the group flagship Hero MotoCorp Ltd.

All the directors put together, who pulled in Rs 1 crore plus, cumulatively took home Rs 4,428 crore ($660 million) last fiscal.

The actual number of executives with listed firms drawing a pay cheque of Rs 1 crore and above is much higher than 1,060, as several CXOs and other senior executives who are not board members also draw such heavy pay packets.

Wipro and Infosys themselves had over 50 employees each in the crore plus pay bracket last year. This number had, however, shrunk from 2014-15 when 187 executives of these two firms alone drew over a crore.