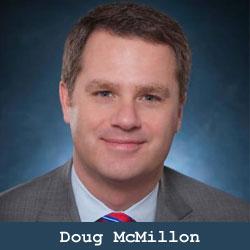 Wal-Mart Stores Inc, the world’s largest retailer, has chosen Doug McMillon, who is currently CEO of its international division, to replace its president and chief executive, Mike Duke with effect from February 1, 2014. Duke, who is retiring, will remain as chairman of the company's executive committee and as an advisor to McMillon for a year.

McMillon was also elected to the company’s board of directors. The company said it plans to make an announcement on McMillon’s successor as CEO of Walmart International by the end of the fiscal year.

“This leadership change comes at a time of strength and growth at Wal-Mart,” said Rob Walton, chairman of Wal-Mart’s board of directors. “The company has the right strategy to serve the changing customer around the world, and Doug has been actively involved in this process. The company has a strong management team to execute that strategy,” Walton said.

Walton said Doug is uniquely positioned to lead the growing global company. "He has broad experience – with successful senior leadership roles in all of Wal-Mart’s business segments – and a deep understanding of the economic, social and technological trends shaping our world. A merchant at heart, Doug has both a long history with our company and a keen sense of where our customers globally are heading next,” he said.

Currently, McMillon heads operations outside the US encompassing more than 6,300 stores and more than 823,000 associates in 26 countries.

From 2006 to February 2009, he served as president and chief executive officer of Sam’s Club, a membership based retail warehouse club under Wal-Mart, with sales of more than $46 billion during his tenure.

He started his career with Wal-Mart as a summer associate in a Wal-Mart Distribution Center. In 1990, while pursuing his MBA, he rejoined the company in a Tulsa, Okla., Walmart store. Much of McMillon’s 22-year career has been in merchandising in Wal-Mart’s US division, with experience in food, apparel and general merchandise.

He has also held various merchandising positions at Sam’s Club and Walmart International in addition to holding leadership roles in all three operating segments of the company.

McMillon also serves on the board of directors of the US China Business Council. Wal-Mart has around 400 stores in China with revenues of around $10 billion.

In contrast, Wal-Mart’s India strategy has been less than spectacular, partly due to restrictive regulations which till recently banned foreign investment in multi-brand retail.

Last month it said it is buying out Bharti Enterprises in their equal equity wholesale retail joint venture Bharti Walmart Pvt Ltd, marking a split in their retail venture. Upon receipt of required clearances, Wal-Mart would acquire Bharti’s stake in Bharti Walmart, the joint venture between Bharti and Wal-Mart, giving Wal-Mart 100 per cent ownership of the Best Price Modern Wholesale cash and carry business.

Bharti Walmart presently operates around 20 wholesale stores in India under the Best Price Modern Wholesale brand. FDI up to 100 per cent is allowed in wholesale retail business.

Bharti independently operates neighbourhood retail chains under the Easyday brand spread across the north India region besides states like Maharashtra in the west and Karnataka in the south. The Bharti-Wal-Mart JV currently also manages the backend of Easyday chain as a logistics partner. It is not clear if that arrangement will continue after the two partners decided to end the alliance.

The breakup of the venture means that now Wal-Mart is free to tie with another local retailer while Bharti can go ahead and bring another foreign retailer as a partner for its existing retail chain.

Wal-Mart has been facing headwinds over bribery allegations related to lobbying for FDI norms in retail in India. Although the government has allowed 51 per cent FDI in multi-brand retail last year, the company is also facing scrutiny over possible violation of the investment and other operational regulations in the sector.