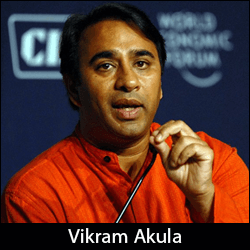 Vikram Akula – the founder of India's lone-listed micro-lender SKS Microfinance who quit the firm in late 2011 over differences with the firm's board – has agreed to acquire a 26 per cent equity stake in financial inclusion start-up VAYA Finserv Pvt. Ltd, according to a press release.

The stake acquisition will allow Akula to use this as a vehicle and to move to the Reserve Bank of India (RBI) seeking a licence to float a small finance bank.

“I think that both the creation of small banks as well payments banks is an extremely progressive step on the part of the RBI, and this will certainly help enhance financial inclusion. We are working with our advisors on preparing a small bank licence application,” Akula said in the statement.

The central bank released the licensing norms for small banks last month and the window to accept applications for small finance banks will close on 17 January.

“While VAYA has a robust plan to grow as a BC, a small bank licence will assist us in furthering financial inclusion by providing loans to small business units, small and marginal farmers, micro and small industries and other unorganised sector entities” said Akula, adding that VAYA also has the option to apply for a payments bank licence.

Akula has also been appointed chairman of the board of Hyderabad-headquartered VAYA, a business correspondent (BC) that works as intermediary and collects deposits and gives loans on behalf of banks in rural pockets where banks cannot reach and earns fee.

He quit as executive chairman and CEO of SKS Microfinance in November 2011. His three-year no-compete agreement with SKS ended in November.

“Now that my three-year non-compete period is over, I was looking to get back to financial inclusion...I chose to join VAYA because it is focused on under-banked districts, it has a great team and it uses a next-generation technology platform that will become the future of financial inclusion,” Akula said.

VAYA, which was floated by former SKS Microfinance executives, opened its first branch in July this year and now operates through 23 branches with 183 employees.

Other investors in VAYA include individual high-net investors, SKS Trusts and VAYA employees, apart from Akula.

Akula had founded SKS Microfinance as a non-profit organisation in late 1997 and led it until 2004, when he joined McKinsey & Company in Chicago as a management consultant. In 2005, he returned to SKS when it was converted to a for-profit NBFC. He led the company as CEO till November 2008, and took the position of executive chairman after SKS appointed Suresh Gurmani as CEO (who was fired in October 2010).