The decade that saw volatility trading come of age

What do you do when daily stock market gyrations all but dry up? Apparently, trade volatility like never before.

Among the myriad Wall Street legacies of the soon-ending 2010s has been the emergence of market volatility - or the magnitude of security price swings over short time spans - as an asset class unto itself. It is all the more notable against the backdrop of the decade's fairly persistent market calm.

The Cboe Volatility Index - nicknamed as 'Wall Street's fear index,' - is on track to end the decade at a level about a third lower than its lifetime average, according to Refinitiv data. With the S&P 500 Index nearly tripling since the end of 2009, the average level of the VIX this decade is the lowest of the three since it launched in the early 90s, even with a number of periodic spikes higher.

Nonetheless, trading volatility, or "vol" in Wall Street parlance, came of age in a big way in the '10s.

While vol has been around for as long as markets have existed, as an asset class it had remained out of reach of the average investor. That changed over the last two decades.

The launch of futures and options on the VIX in the mid-2000s led the way for the rollout of sophisticated exchange traded products (ETPs) near the end of that decade and provided everyday investors the first chance to trade vol on its own.

A small legion of volatility-linked ETPs followed over the next 10 years.

Some allowed investors to bet on stock gyrations rising, while others let traders bet on the opposite outcome.

With the launch of these ETPs, trading in volatility was no longer limited to the futures and options market, where it all began. Investors could finally place bets on volatility as easily as trading stocks.

Investors plowed billions of dollars into both long and short volatility ETPs, with assets of select leveraged and inverse volatility ETPs hitting about $4 billion by the end of 2017. Assets in top volatility-linked ETPs now stand at about $3 billion. 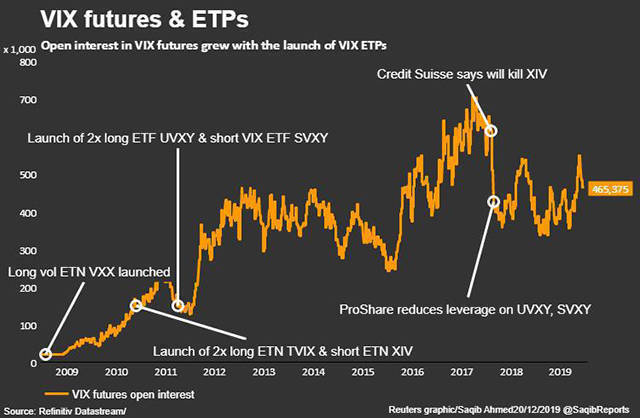 While most of these products started out being used by institutional players as hedges, an extended period of stock market calm in 2016-2017 boosted the returns for some short volatility ETPs, including the VelocityShares Daily Inverse VIX Short Term ETN, attracting ever more speculative players.

Yield-starved investors had stumbled upon what looked like the proverbial free lunch.

In an environment where the VIX plunged to new lows, buying short volatility ETPs reaped gold.

Volatility selling became such a rage that analysts warned that the trade was creating a feedback loop where the more investors sold volatility the lower it slipped.

That is until a sudden drop in the U.S. stock market in February 2018 wiped out most of the value of these ETPs and led to the collapse of some products, including XIV. 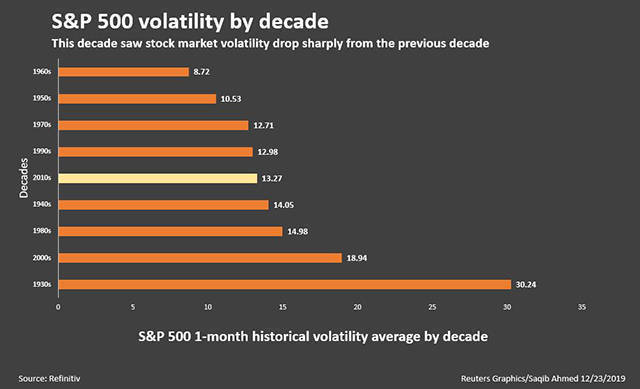 As the decade ends, the volatility ETP landscape looks much more stable than it did in 2016-2017, even as interest in trading volatility looks here to stay.