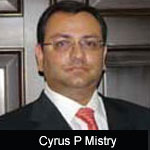 The electrical and electronics engineer from BITS Pilani, who also went on to complete MBA from IIM Ahmedabad, was till recently COO of watches & accessories division of Titan Industries, a Tata Group firm. Titan generated revenues of around Rs 1,860 crore from watches and eyewear & accessories business in FY12. Tata Global Beverages closed FY12 with revenues of Rs 6,631 crore.

Early this year, Bhat had announced a sabbatical from work for nine months starting April to write a book on the Tata

Group. Darius Pandole comes in as an independent director on the board of Tata Global Beverages. Before joining New Silk Route Advisors, he had worked with Kraft General Foods in the US and IDFC PE. Upon his return from the US in1993, Pandole managed the operations of his family-owned soft drinks business, Duke and Sons Limited, which was a market leader in Western India.

Cyrus Mistry’s induction into Tata Global Beverages board can be seen as a part of the process of bringing him on the board of all key companies of the multi-billion dollar Tata Group. Ratan Tata is currently the chairman of Tata Global Beverages. In November, 2011, Tata Sons, the holding company of Tata Group appointed Shapoorji Pallonji Group’s Cyrus P Mistry as the successor to group chief Ratan Tata. Mistry is the younger son of Pallonji Mistry, the single largest shareholder in Tata Sons.

The appointments come within five months of the firm striking a deal with US-based Starbucks to form an equal equity joint venture for launching the iconic coffee chain in India.

This came a year after Starbucks signed a non-binding Memorandum of Understanding (MoU) with Tata Coffee, a listed subsidiary of Tata Global Beverages, for sourcing coffee and also for retail business in India. The MoU was to create avenues of collaboration between the two companies for sourcing and roasting green coffee beans in Tata Coffee’s Coorg facility.