At a time when the National Democratic Alliance (NDA) government wants to ensure an uninterrupted supply of fertiliser to farmers, the Rs9,000-crore Talcher project in Odisha has hit the skids, with consultant SBI Capital Markets Ltd raising doubts over the project’s feasibility.

“SBI Capital Markets has submitted a report recently raising doubts about the financial and technical feasibility of the project and has called for further studies,” said a person aware of the development requesting anonymity.

A meeting has been called by Niti Aayog on Wednesday to discuss the future of the project. Senior government officials from the department of fertilizers will also attend the meeting. 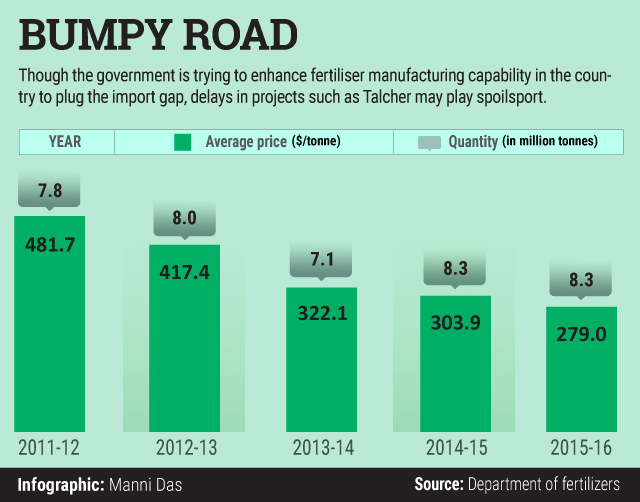 This comes in the backdrop of growing farm distress in the country given two successive years of below-normal monsoon. The NDA government has focused its energy on reviving the rural economy with particular impetus on agriculture and doubling farmers’ income in the next five years.

With the coal gasification technology for the project undecided, CIL had appointed SBI Capital Markets as a consultant to find out the project’s feasibility given the high ash content of the coal available for the project.

“Subsequent to detailed feasibility study, execution of construction activities is likely to start in the year 2015-16 and expected to complete by the year 2019,” said a government statement released on 24 December 2015.

A government official, who also didn’t want to be identified, aware of the delay said that such studies take time and may delay the project further.

“The meeting will basically decide the broad contours for paving the way ahead for the project,” the government official added.

This comes in the backdrop of the government exploring the revival of closed fertiliser units at Barauni and Gorakhpur by Maharatna public sector units such as Oil and Natural Gas Corp. Ltd, NTPC Ltd and CIL. The change in strategy was warranted by low number of bids for Sindri and Gorakhpur units last year.

Queries emailed to the spokespersons of ministry of chemicals and fertilisers and CIL on 8 April, and to GAIL, RCF and FCIL on 10 April were also not answered.

According to information available on the website of the ministry of chemicals and fertilizers, the Talcher project will produce 1.3 million tonnes (MT) of urea and few other fertilisers, too.

Experts believe that the government should put in effort to revive closed fertiliser plants.

“We have seen serious shortage of fertiliser in the past. Whatever steps the government is taking to revive the closed fertiliser units is a welcome step,” said T. Haque, chairman of the expert group and former head of the Commission for Agricultural Costs and Prices.

“Besides, the project will give the much needed urea fertilizer to farmers of the country,” the 24 December government statement said, adding, “Success of this project is expected to be a game changer and shall pave the way forward to the production of fertilizer from abundantly available coal resulting in less dependency on imports.”