Recent million dollar investments by foreign investors ranging from Japanese communications group SoftBank to Chinese ecommerce giant Alibaba in new-age Indian ecommerce companies have given a boost to India’s startup ecosystem. Wealthy Indians too are making a beeline for new investment opportunities in Internet and e-commerce start-ups, a trend which is worth being exuberant about.

Two things, till very recently, marred the overall excitement. One was the fact that the majority, specially the large investments, were made by very large foreign investors (including AliBaba, Temasek  and Softbank), and the second was that funds that were investing, and making money, only took  funds from foreign investors (like Accel, Nexus Ventures, Tiger, etc). Marred, I say, because it seemed that the very populace that the digital economy served, i.e. us Indians, residing in India, were hardly able to participate in the bonanza.

Of late, I am glad to share with you, things seem to be changing.

Like me, I am sure you would have seen news articles that prominent Bollywood celebrities, sportspersons and business leaders, have started investing into this space. And there have also been a few funds that specifically took our money to invest into early stage. This includes Blume (Sanjay and Kartik Reddy), Orios (Rehan Yar Khan), Kae (Sasha Mirchandani), Zodius Technology Funds and many more in the pipeline.

As I am from a firm that helps HNIs to invest in this space, I can also confirm that large family offices have been actively looking at ways to be part of the story.  The participation could be as incubators – providing capital, infrastructure and management support at very early stage, or as co-investors – investing as a part of consortium with others, or through funds – wherein a fund manager makes the investment decision, or through a combination of some or all of these.

The key question to ask is: what is in it for investors?

Answer is not that simple but let us make an attempt.

When US institutional investors and HNIs were asked why they have invested in alternative investment strategies, most of them express an interest in seeking greater returns. For many, these strategies offer the promise of "supercharging" their portfolios because alternatives are viewed as the asset class with the highest available return as returns from equity and fixed income asset classes were reverting to historical averages. Investors most often expect that equity-like returns can be achieved without taking on exposure to public market equity risk.

Valuation of the top 10 biggest startups is given below and this is what is driving the investors as every one wants to be part of the next such company. 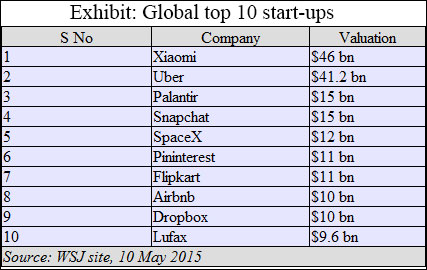 This is the reason that large endowment and pension funds in the West started investing in the private space in 80s. Yale Endowment was amongst the first institutional investor to invest in alternative asset classes and other followed.  Now, almost all of the medium or large endowment funds and pension funds have investments in alternative asset classes.  Some of the large investors can source and evaluate the opportunities themselves while the smaller ones depend on the professional advisors for the sourcing and due diligence.

If we put returns and diversification benefits together, risk adjusted returns in a carefully constructed large private investments far outweighs the other asset classes.

Further, unlike listed equities, in the private space, success propagates success.  The best deals in the market go to the most successful investors. One could name a few global investors like Tiger, KPCB, Andreesen Horowitz, Khosla Ventures etc in this category.  Local Indian emerging would be Rehan Yar Khan, Sasha Mirchandani, Bharti Jacob etc.

There are many risks in the private equity investing, the biggest being liquidity.  An investor cannot exit the investment at wish as there is no liquid market for it.  For a growing company, the investor either has to rely on existing investor/ management to buy him out, strategic sale or IPO, if it happens.

Also, the cash flow demand could change with time and could be a drag on the other portfolio of the investor, especially if he keeps it in the low earning assets to fulfill the future demand.

Private space is under researched and that is one of the reasons that returns are much higher.  The reverse is that for an amateur investor, it could be risky as he could lose all or large part of the capital. It is said that more than 95% of the startups fail in the first year itself.  An investor generally does not hear about these failures as the failed companies are hardly covered in the media.  For such an investor, it is prudent that he is either part of a good angel network, or invests in a portfolio managed by a fund manager.

There are certain sectors that are only available in the private space.  Ecommerce is an example of such a sector in India.  Barring Infoedge and Justdial, there is no other company which is in the listed space. Such examples could include Flipkart, Ola, Snapdeal, PayTM etc.

Many times even very successful and established companies are only available in the private space.  Examples could include large asset management companies, insurance companies, upcoming banks etc.

The only way an investor can participate is to buy a stake in a private company.

The profile of investors in the space is very diverse – ranges from successful entrepreneurs to very seasoned private equity fund managers.  The old economy businesses have started testing the waters by investing small amounts but their presence is yet to be felt.

The excitement in the startup space has begun but we have miles to catch up if we want to be close to Silicon Valley.  However, the journey has begun.