This adds to the challenges facing Narendra Modi as he begins his second term as prime minister with India’s economy at its weakest levels in six years.

“The slowdown in credit growth this time is a result of both reduced demand and supply,” Madan Sabnavis, chief economist at CARE ratings, said. 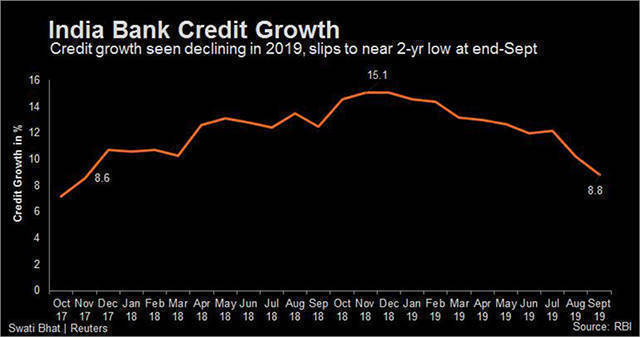 Lending growth by banks had nearly halved to 8.8% at the end-September from the start of the year.

The RBI data includes all banks in India, which is dominated by state-run lenders Bank of Baroda, Punjab National Bank  and Union Bank of India as well as private ones such as HDFC Bank and ICICI Bank. 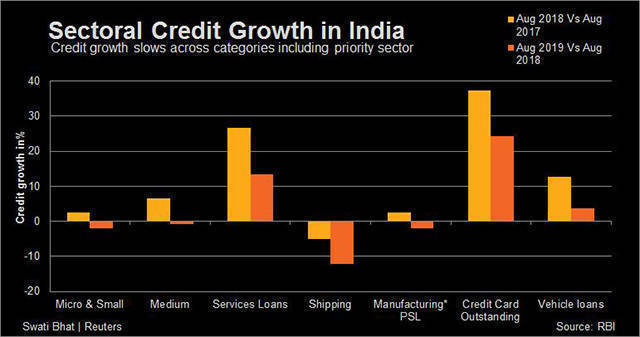 While retail lending has driven growth, banks are taking a more cautious approach on some consumer loans.

“In certain retail loans we’re seeing customers delaying the payments by a few days over the due date,” said the head of consumer banking segment of a private bank, adding that this does not bode well when corporate lending has plunged.

A report last month by India Ratings predicts “further moderation” retail lending in 2020 “given the consumption slowdown across segments including housing and auto”.

“Even the unsecured loans, which include credit cards, education loans and other personal loans have seen a moderation in growth,” the report said.

India’s lending problems have been compounded by a drying up of liquidity in the shadow banking sector last year after the collapse of infrastructure lending group IL&FS.

While some major non-banking financial companies (NBFCs) have been going slow on lending, others stopped completely.

However, banks have not used this opportunity to win market share from NBFCs, which accounted for 30% of auto loans and more than 40% of home loans until the end of last year. 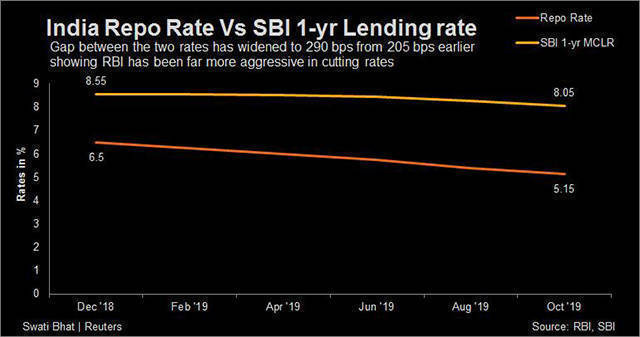 The weak growth in lending comes at a time when banks have been cutting interest rates and making it cheaper to borrow.

So far in 2019, the RBI has reduced the repo rate by 135 basis points. Even though banks have not matched this, the pace of cuts has picked up in the last few months. 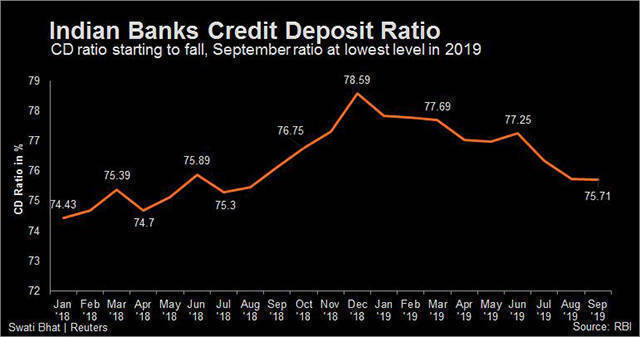 A high credit-deposit ratio has been one of the key reasons why banks have struggled to cut interest rates. But with credit growth falling faster than deposit growth, banks may have a bit more room to transmit rate cuts.

A credit-deposit ratio above 75% indicates pressure on banks’ resources as they have to set aside funds to maintain a cash reserve ratio of 4% and a statutory liquidity ratio of 18.5%.

In an attempt to push banks to pass rate cuts on to their customers, the RBI has required them to link all loans to an external benchmark such as the repo rate since the start of this month. While this is expected to push rates down, economists are not sure this will help spur credit demand.