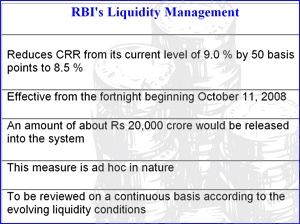 In an attempt  to ease the current  liquidity crunch in the financial system, the Reserve Bank of India on Monday announced a half percentage point (50 basis point) reduction in the cash reserve ratio (CRR) to 8.5 per cent from 9 per cent, thereby joining central banks across the world in injecting liquidity as the global financial crisis deepens.

According to the RBI statement, thise revision in CRR, which will come into effect from the fortnight beginning October 11, 2008, will release Rs 20,000 crore into the system.

CRR is the portion of the deposits banks have to keep with the Reserve Bank of India. The CRR cut will now increase the lendable resources of banks, which had been tightening their loan taps as liquidity came under pressure.

But making its intentions clear, the RBI clearly said in its statement, “this measure is ad hoc, temporary in nature and will be reviewed on a continuous basis in the light of the evolving liquidity conditions". Such a move from the government can have an impact on short term borrowing rates but banks are unlikely to take a long term view on the lending rates as the measures taken by the Central Government are ad-hoc in nature.

This is the first time in the last five years that the central bank is reducing CRR, the last cut being in June 2003. Since then, RBI had resorted to CRR hikes several times to soak up excess liquidity.

Monday’s decision to cut CRR by 50 basis points follows the series of measures announced by the RBI on September 16 to ease the tight liquidity conditions due to the turmoil in the global financial markets.

“Since then (after the September 16 measures), there has been a sharp deterioration in the global financial environment with the number of troubled financial institutions rising, stock markets weakening and money markets strained.

These developments have impacted domestic money and forex markets with a marked increase in volatility and sharp squeeze on market liquidity as reflected in the movements in overnight interest rates and high recourse to the LAF,” the RBI statement said.

RBI said "in view of the evolving environment of heightened uncertainty, volatility in the global markets and the dangers of potential spillovers to domestic equity and currency markets, liquidity management will continue to receive priority over the period ahead".

The RBI has been following a tight monetary policy owing to the rising inflation which for the first time in thirteen years, crossed the 12 per cent mark.  This led to high interest rate regime.  Cut to the present, Inflation and oil prices,  the two other main drivers of interest rates, are  showing  signs of easing.

In an environment where banking systems are collapsing, this major step from the government was particularly important as the banks were not lending to each other due to lack of faith in the system, which is exactly what is happening across the global markets.

Extreme nervousness in the credit markets has pushed up the London Interbank offered rate that banks charge each other- and pushed down the yield on super- safe treasury bills.