Private investments into companies in India plunged in the January-March quarter to their lowest level in more than three years, dashing hopes of any early revival in dealmaking as investors remain wary of making fresh bets.

[auth-user]Private investments into companies in India plunged in the January-March quarter to their lowest level in more than three years, dashing hopes of any early revival in dealmaking as investors remain wary of making fresh bets.

The number of private investment deals dropped to 238 in the first quarter of 2017, down 45% from a year earlier and 26% sequentially, according to the Quarterly Deal Report by VCCEdge, the data research arm of News Corp VCCircle.

Venture capital deals fared the worst with the number of transactions falling 31% from a year earlier.

The total amount of money invested by private equity firms, venture capital and angel investors fell 27% from a year earlier to $3.04 billion in the January-March period. The deal value was down 22% from the preceding quarter. 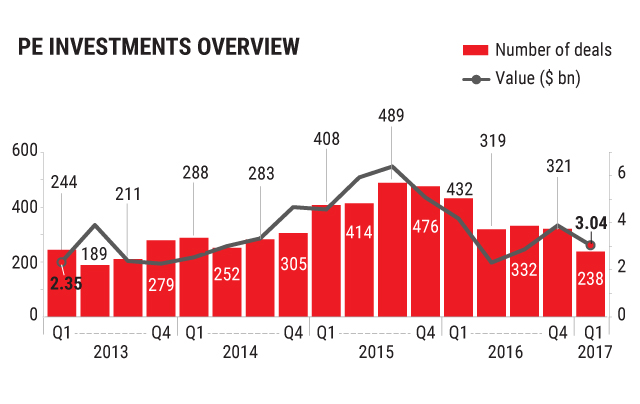 The total deal value would have been even lower but for the $952 million investment by private equity giant KKR and Canada Pension Plan Investment Board in telecom tower firm Bharti Infratel Ltd.

While the total deal value dropped, the average ticket size of transactions rose. The median value of private investment deals in the first quarter of 2017 was the highest in 15 quarters at $2.25 million, up from $0.6 million a year earlier.

Private investments, particularly in startups, had started slowing in the last quarter of 2015 as valuations hit the roof and investors worried about the lack of visibility on profits. The trend became more entrenched in 2016, as startup shutdowns and valuation markdowns made matters worse.

In terms of sectors, financials, consumer discretionary, industrials and healthcare saw a decline in terms of both deal volume and value during January-March.

While investors tightened their purse strings, their record in terms of exit deals in the first quarter was mixed. 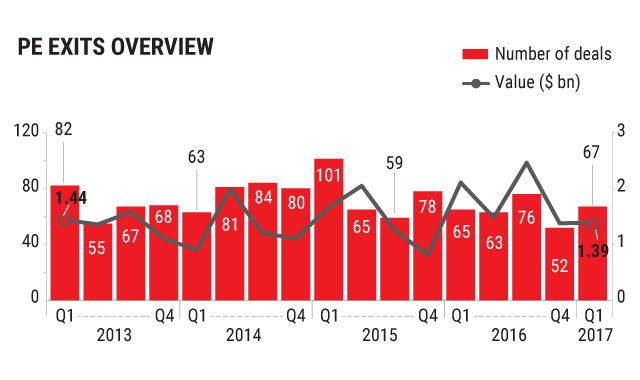 The number of exit deals during January-March was higher compared with both the year-earlier period and the preceding quarter. The value of such transactions was little changed from the October-December period but fell from the first quarter of 2016.

The financial sector saw 17 exit deals in the first quarter, followed by the healthcare sector. The biggest exit deal was private equity firm Providence selling its stake in telecom operator Idea Cellular Ltd in February for about $193 million.

M&A deal volume fell to a seven-quarter low during the quarter ended 31 March. The total value of M&A deals jumped 55% from a year earlier to $16 billion but fell 23% from the preceding quarter. 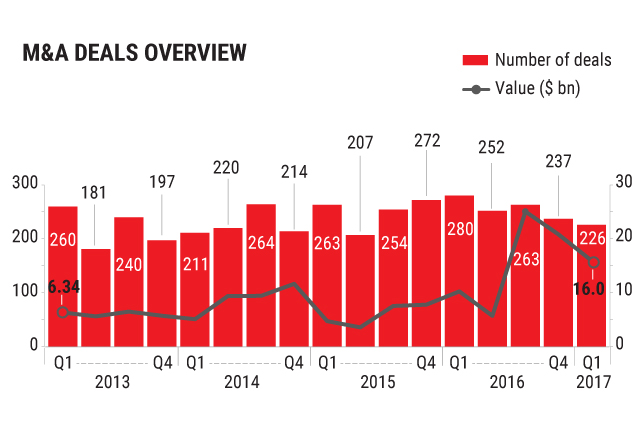 The information technology sector recorded the most M&A deals, 62, followed by financials sector with 33 deals. M&A deal numbers declined the most in the consumer discretionary and consumer staples sectors.

The equity capital market was the only bright spot in the first quarter of 2017. Investors thronged to subscribe to big initial public offerings such as those of stock-exchange operator BSE Ltd and Avenue Supermarts Ltd, operator of hypermarket chain D-Mart.

The number of equity capital market deals rose to 45 in the first quarter, the second-best performance in four years. The deal value was higher compared with both the year-earlier period and the preceding quarter. 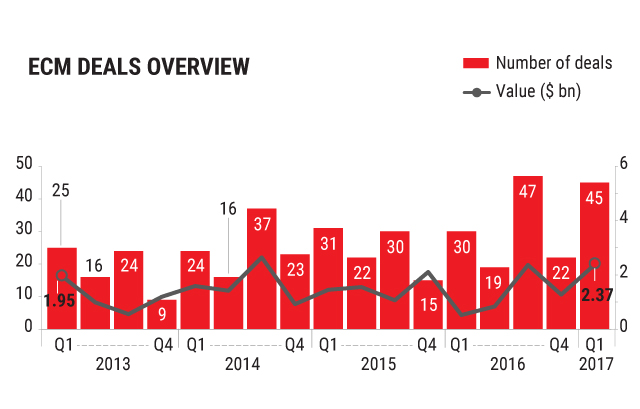 Four out of five IPOs during the quarter were heavily oversubscribed. The IPO of Avenue Supermart was covered 105 times while the BSE issue was subscribed 51 times. The IPOs of Music Broadcast Ltd and Shankara Building Products Ltd were oversubscribed 39 and 41 times, respectively.

Please find the full report below.