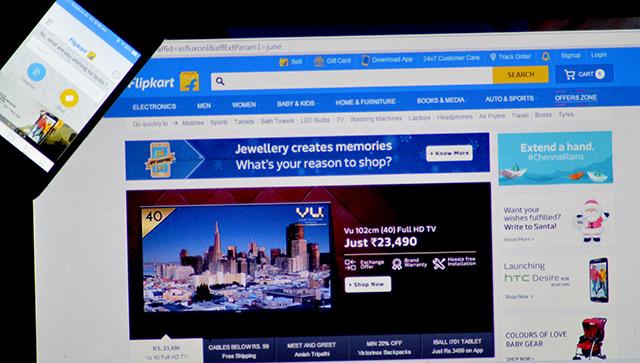 Indian e-commerce firm Flipkart has suffered its second markdown in as many months with a mutual fund managed by Morgan Stanley slashing the value of its stake in the company by 3%.

According to filings with the US Securities and Exchange Commission (SEC), a Morgan Stanley fund lowered the value of the Flipkart shares it holds to $50.51 as of December 2016 from $52.13 apiece in September. This values Flipkart around $5.39 billion.

The development was first reported by the Mint newspaper.

Morgan Stanley had, late last year, marked down the value of its shares in Flipkart by 38.2% for the September quarter to $52.13 per share from $84.29 per share in March 2016, leaving India’s largest e-commerce marketplace’s valuation at $5.57 billion.

In January, a mutual fund managed by Fidelity Investments, lowered the value of its investment in Flipkart by 36.1%, valuing the e-commerce marketplace at $5.56 billion.

A number of other American mutual funds including Vanguard Group, Fidelity, Valic Co., T Rowe Price have also lowered the value of Flipkart shares they hold in the past.

The fresh round of markdown comes at a time when Flipkart is seemingly seeing early signs of a reversal in fortunes. Flipkart has reportedly outrun rival Amazon India in gross sales in two consecutive months, after trouncing the US-based e-commerce company with its Big Billion Day sales in October.

According to a recent report in Mint, Flipkart Internet Pvt. Ltd registered gross average sales of over Rs 2,600 crore for December and January, compared with Rs 2,300 clocked by Amazon Seller Services Pvt. Ltd. Flipkart’s numbers do not include sales data from its fashion units Myntra and Jabong.

For Flipkart, 2016 was a tumultuous year with sharp and successive markdowns, constant CXO-level churn, tough competition in the market and slow growth.

This eventually forced Tiger Global, its major investor, to take direct control of the company with the appointment of its former executive Kalyan Krishnamurthy as CEO of the firm in early January.

It looks like Krishnamurthy, who is known for successfully executing strategies, is focusing on growing its existing market and business organically while guarding its market share.