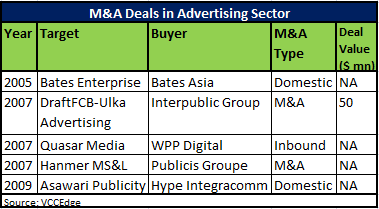 The stake has been reportedly picked up for Rs 240 crore, valuing the seven-year-old firm at nearly Rs 1,000 crore.

Dentsu has also brought Dentsu Mediatech and Clickstreamers under the Dentsu Communications umbrella with this deal. Goyal will resign from the board of the three advertising agencies and also step down as the chairman of the Dentsu India Group. But he will continue to work with the firm as its Founder Chairman. Tanya Goyal will also resign from the boards of directors and will become a  Principal Advisor to the Dentsu India Group.

Dentsu's clients include Indiabulls, ICICI, Wipro, Acer, Toyota, Honda, Suzuki, Canon, Panasonic, among others. It reportedly had billings of Rs 1,200 crore in 2010.

Goyal formed the joint venture with Dentsu, a more than 100-year old company formed in 1901, 2003. Goyal, a well-known name in the world of media & communication, was earlier Group CEO of Zee Telefilms & is a former President of ad agency Rediffusion DY&R.

"By making these three companies wholly-owned Dentsu subsidiaries in the rapidly developing and increasingly important Indian market, we aim to enhance our infrastructure to provide the best integrated solutions to our clients in all the business domains," said Yuzuru Kato, the Dentsu Inc. Executive Officer in charge of global business development.