“In 2012, Income-tax Act was amended to provide for taxation of those transactions of transfer of shares or interest in a foreign entity deriving its value substantially from Indian assets. Apprehensions have been raised about some difficulties which arise because of this provision in case of transfer of stake of investors of India-based funds located abroad but investing in India-based companies,” the finance minister said in his budget speech..

“In order to remove this difficulty, I propose to exempt Foreign Portfolio Investor (FPI) Category I & II from indirect transfer provision. I also propose to issue a clarification that indirect transfer provision shall not apply in case of redemption of shares or interests outside India as a result of or arising out of redemption or sale of investment in India which is chargeable to tax in India,” the finance minister clarified in his budget speech.

The clarification removed uncertainties in terms of tax for limited partners (LPs) looking at India.

Indirect transfer provisions were introduced in the I-T Act in 2012 with retrospective effect. They elicited a lot of attention after the government sought to bring Vodafone Group Plc’s $11 billion acquisition of Hutchison Essar Ltd in 2007 under the tax net in India. 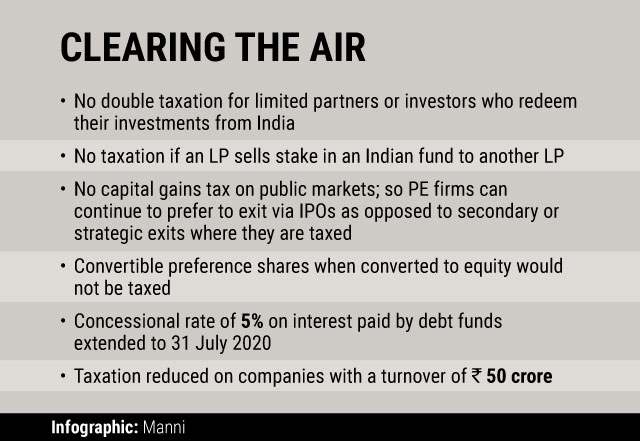 On 21 December, the Central Board of Direct Taxes (CBDT) issued a circular on the indirect transfer provisions which added to the confusion.

In essence, Jaitley exempted investors or LPs from taxation should they sell their stakes in funds investing in India to other LPs or entities.

He also clarified that LPs would not suffer double taxation should they redeem their shares from a sale in an Indian investment, which has already been taxed.

“This is a boost,” said Girish Nadkarni, partner at IDFC Private Equity, referring to the removal of double taxation.  “The government has taken the right view.”

“If one of the LPs was transferring stake to another, there could have been a potential tax or a withholding of tax on such a transfer that the fund would have to deal with. Not only was it double taxation, it was also not practical as the transaction was between the two parties—and the fund would not be party to that. So, it would be difficult to implement," Nadkarni said.

Nadkarni noted that since the Budget made no mention of the long-term capital gains tax, private equity investors are likely to prefer IPO exits over secondary or strategic exits, which are taxed.

The Budget has also made a clarification on the conversion of preference shares to equity which benefits the private equity firms.

“Most PE firms prefer to make investments in the form of preference shares. Earlier, there was a doubt if conversion of preference shares into equity was going to be taxed or not. The finance minister has now clarified that this is not taxable,” said Alok Mundra, partner, KPMG.

At the same time the period of holding is also available to investors who are converting their preference shares into equity so that they are not liable for short-term capital gains tax, Mundra said.

“There is also cheer for foreign funds striking debt transactions in India, with the finance minister clarifying that the 5% concessional rate has been extended to July 2020, from July 2017,” Mundra said.

Prakash Nene, managing director at Multiples Alternate Asset Management Pvt. Ltd, said, “The budget in the entirety has given a positive feedback to the industry and the economy. Positives for investors include tax neutrality for conversion of preference shares to equity shares and ability to carry forward cumulative losses in case of change of ownership.''

“However, the Budget is a mixed bag for private equity investors as several of our demands need further clarification from the government. While, the government has made changes with the safe harbour route in India, the norms still need to be made less stringent to be effective. Further denial of capital gain tax exemption in respect of sale of listed entities on stock exchanges if the purchase was made without payment of STT is a dampener. Currently this denial even covers investment in unlisted shares which are listed and sold post IPO, ” Nene said.