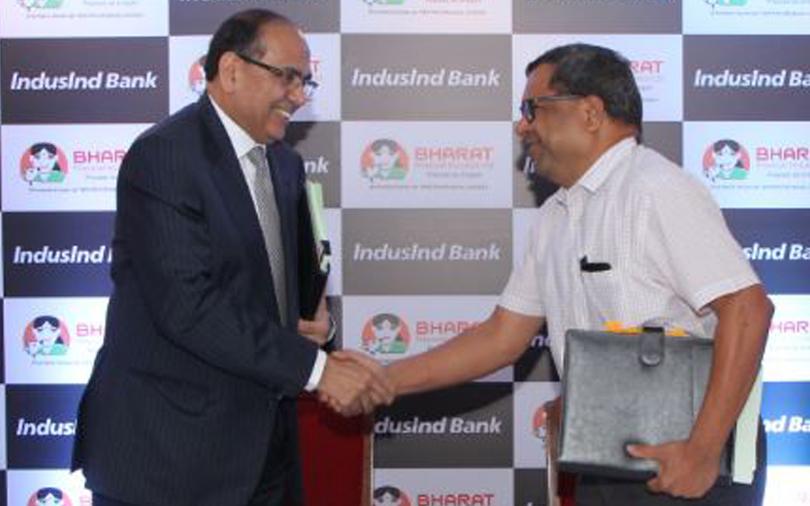 IndusInd Bank Ltd said on Saturday it has agreed to buy microlender Bharat Financial Inclusion Ltd in an all-stock deal.

The private-sector lender said in a stock exchange filing after a board meeting that it will exchange 639 of its shares for every 1,000 shares in Bharat Financial. It will subsequently transfer Bharat Financial’s operations into a wholly owned subsidiary, the bank said.

The transaction is likely to be completed in six to nine months.

IndusInd and Bharat Financial, earlier known as SKS Microfinance Ltd, had announced entering into exclusive talks for a merger in September.

In May, Bharat Financial had said that it was exploring talks with a few banks to see the viability of a takeover or a partial stake sale to a strategic investor.

At the time, managing director MR Rao had said that the firm was evaluating options for both a share swap or an all-cash deal. It was in talks with IndusInd Bank, IDFC Bank Ltd and RBL Bank.

IndusInd Bank also said that Bharat Financial, India’s first microlender to go public when it floated its initial share sale in 2010, fits with its strategy to expand its rural banking and microfinance operations.

The bank has 1,210 branches, including about 250 in rural areas, and 999 vehicle finance outlets. Its network will expand to more than 3,600 banking points after acquiring Bharat Financial’s 1,408 branches.

The combined entity will have about 16.3 million customers and 40,355 employees. It will have a total loan book of Rs 1,26,038 crore, according to an investor presentation.

IndusInd Bank, founded by the London-based billionaire Hinduja brothers, commenced operation in 1994. It caters to both consumer and corporate customers. The bank had deposits of Rs 1,26,572 crore at the end of March, according to an investor presentation. This was double from the level three years before. Its revenue was Rs 10,234 crore for 2016-17.

The acquisition of Bharat Financial is the second M&A deal by IndusInd Bank this year; it had agreed to acquire IL&FS Securities Services Ltd in March for an undisclosed amount.

Previously, in April 2015, IndusInd had acquired the diamond and jewellery financing business and related deposit portfolio of Royal Bank of Scotland NV in India. The size of the portfolio was about Rs 4,100 crore.

In 2011, it had bought Deutsche Bank’s loss-making credit card business in India for an undisclosed sum.