The Indian education market is expected to almost double to $180 billion by 2020, buoyed by the rapid expansion of the digital learning market and the world's largest population in the age bracket of six to 17 years even as the sector continues to be plagued by poor infrastructure and a shortage of trained teachers.

According to a 2016 report by management consulting firm Technopak, India’s education market is valued at $100 billion currently while the digital learning market is estimated at $2 billion. 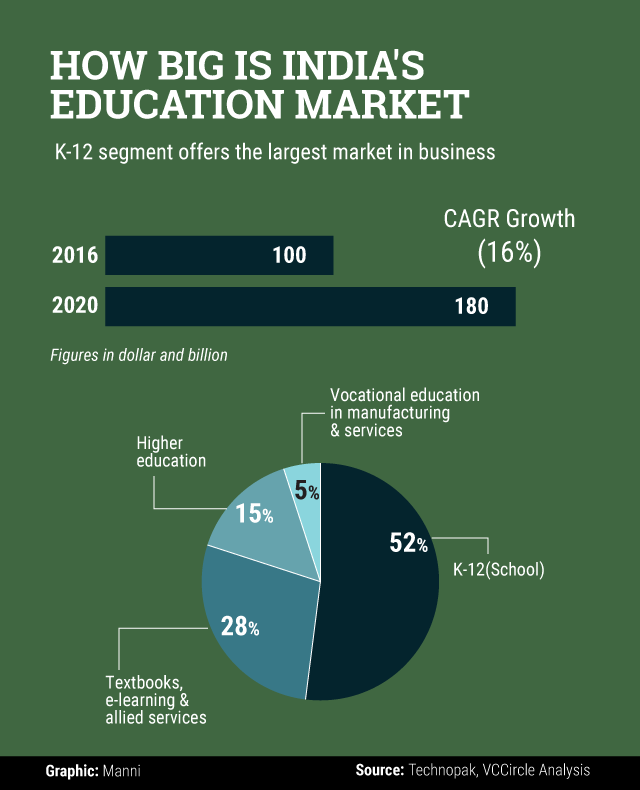 The digital learning market is expected to reach $5.7 billion by 2020 as the number of internet users is increasing. India’s internet user base is estimated to reach 550 million by 2020 with an approximately 40% penetration, a significant increase from the 35% currently, the report compiled in partnership with Simplilearn said.

The K-12 segment is valued at $52 billion with a market share of 52%. With the current enrolment of 260 million, the K-12 segment offers the largest and most attractive segment for digital learning providers in India, the report noted.

However, digital learning cannot replace the conventional brick and mortar model of education—it can supplement it by filling in the existing need gaps, it added.

It even beat the 2015 deal value at $166 million coming from a deal volume of 81 deals, the highest in the last five year. The deal value was the highest in 2014 at $243 million on the back of the $143 million investment in Bengaluru-based Manipal Global Education Services.

Mergers and acquisition activity in the education space has seen 16 deals so far this year, just a deal lower than 17 deals struck last year. The deal value at $47 million is the highest in the last five years.

The demand for education exists both at the student and employment level with 619 million population (students) falls in the 0-24-year age group. The total workforce in the country is estimated at 474 million, of which 232 million persons were employed in agriculture, 115 million in industries and 127 million in the services sector.

"These favourable demographics brings enormous economic opportunities. However, the ability to seize these opportunities depend on how successfully the challenges plaguing the Indian education system can be addressed," the report said.

The public expenditure on education remains far from 6% of the GDP, according to Central Statistics Office (CSO), India.