Only 27% of women in India participate in the labour force, according to a report by Harvard University’s Evidence for Policy Design team. The report added that India lags behind Brazil, Russia, India, China and South Africa (BRICS) and other south Asian nations.

This comes in the backdrop of Narendra Modi-led government’s focus on job creation.

“On one hand, the country’s level of women education is rising, but on the other we have seen their participation in labour force declining. Nearly 73% of women are not in the labour force, while 44% are not willing to work,” said Rohini Pande, an economist at Harvard University’s John F. Kennedy School of Government, while releasing the report on Monday in New Delhi.

Between 2010 and 2012, women’s share in the manufacturing labour force rose from 15% to 25%, but the gender wage gap across sectors in manufacturing was higher than that in the services, the report said. 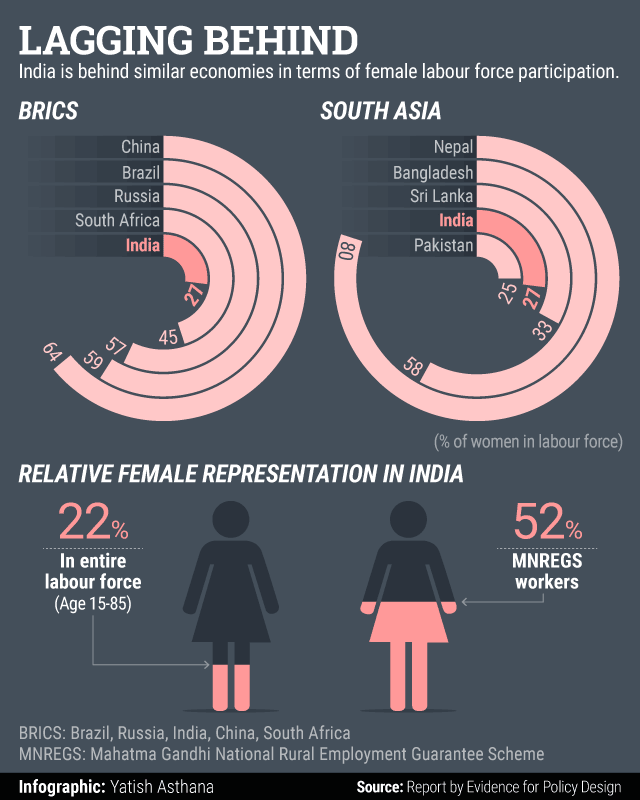 The Indian economy is expected to grow by 7-7.75% in the next financial year. The National Democratic Alliance (NDA) government last month termed infrastructure investment as a support pillar of its theme to transform India in the Union budget. This entails a higher public spending of Rs2.21 trillion to support infrastructure development, and is expected to create job opportunities.

The report further mentioned that migration for employment remains an under-explored and less supported means to support women.

“Nearly 69% of female youth report that it is unsafe to live away from home for skill training and dropout rates for women placed in jobs after training courses is high,” said Pande, the Mohammed Kamal Professor of Public Policy at Harvard Kennedy School.

However, India’s additional solicitor general Pinky Anand said that the falling female participation in the labour force is symbolic in nature and access to skill training will help women return to the labour force.

The report acknowledged that Modi government’s Skill India, Make in India and new gender-based quotas in various sectors can spur positive change, but stressed upon the need to invest in skill training and job support.

Stressing that urbanisation and growth in manufacturing is the solution to this issue, Manish Sabharwal, chief executive officer, Teamlease Services Ltd, said that focusing on ease of doing business, formalisation of goods and services tax, and skill system is necessary to bring more and more women to work.

Echoing the same sentiment, Manish Gupta, vice-president, Xerox Corp., pitched for giving equal opportunity to both males and females. Anand, Sabharwal and Gupta were speaking at the event where the report was released.

The NDA government has been formulating policies aimed towards helping the girl child. In 2015, it launched the Sukanya Samridhi Yojana for the girl child. Under the scheme, a bank account for all girls under 10 years of age can be opened and it has been designed to meet the girl’s higher education and marriage needs to be met from deposits made by the government.

Outlining that the jobs near home attract more women, the report added that the Mahatma Gandhi National Rural Employment Guarantee Scheme (MGNREGS) has seen increased participation from women over the last five years, and now employs 52% women compared with 48% men.

In an admission of the efficacy of the scheme by the NDA government, the Union budget has made an allocation of Rs38,500 crore towards MNREGS for 2016-17.