Indian residential property market has reached an inflexion point with fresh supply undershooting sales for the first time in the last five years but this does not signal an immediate recovery for the sector as demand remains soft, according to real estate research firm Knight Frank.

Indeed it estimates both new launches and sales continued to decline sequentially in the first half of 2015. The pace of decline in launches was higher. Knight Frank said the country's top eight markets saw 1.1 lakh units sold in the six months ended June 30 against launch of 95,000 properties in the same period.

Although the continuing slide in actual sales indicates demand has not recovered it marks a positive development as this would slowly shrink the already bloated inventory or unsold properties in the top cities. This is essential for an eventual recovery for the market.

In its half yearly report ‘India Real Estate January – June 2015’, Knight Frank said that the housing market is gasping for breath as launches and sales have continued to drop for the last two-and-a-half years and there is no sign of recovery in the coming six months.

According to its findings, unsold inventory stands at seven lakh units across top realty markets and will take over three years to clear at the current rate of absorption. The market has also seen a deceleration in price rise from 9 per cent to 2 per cent over a period of three years, it said. 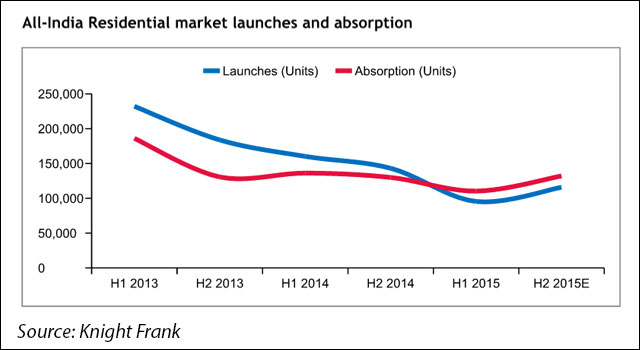 Launches have continued to take a downhill ride over the last two years with the lowest supply coming in H1 2015. Absorption, on the other hand, dipped during 2013 and was almost stagnant last year. Even though demand remains very sluggish, data show that absorption is expected to be higher than supply in the second half of the year as well.

Shishir Baijal, chairman and managing director, Knight Frank India, said, “Despite economic scenario strengthening, we are seeing no improvement in the residential market across the top eight cities. While sales dropped by nearly 20 per cent during January-June 2015 compared with the same period last year, new residential units coming into the market fell by 45 per cent. Going forward we do not see any improvement until the end of 2015 in terms of sales.”

On the commercial properties front, however, the report said that demand has consistently surpassed supply since 2014 and there is a severe shortage of good quality office space across top realty markets. The key drivers for commercial realty in H1 2015 are e-commerce, consulting and media apart from the traditional key sectors like IT/ITeS and BFSI. 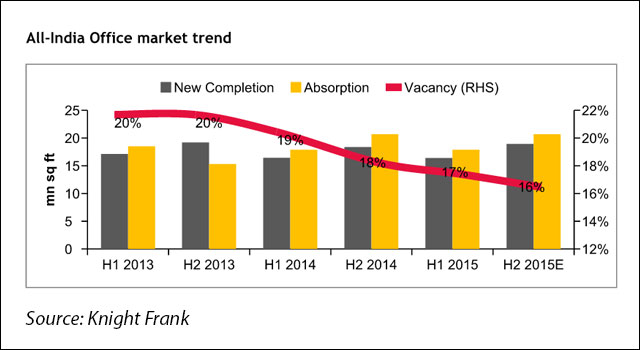 Vacancy level, an important indicator for commercial realty market, stands at a two-year low of 17 per cent in H1 2015 and is expected to slip to 16 per cent in the second half.

Improving business sentiment and recovery in domestic economy has helped in maintaining a positive sentiment after the turnaround in the office space market last year.

“We have observed office space transactions to the tune of 18 million sq ft during January-June 2015 across the top six cities. The average vacancy level across these markets stands at 17 per cent—the lowest since the global financial crisis. Leading e-commerce players are now emerging as strong drivers and have inked office space deals upwards of a million sq ft each in recent months,” Baijal said.

The biggest realty market in the country by value, Mumbai saw the worst six months in H1 2015 post global financial crisis with launches shrinking by 47 per cent and sales continuing its downhill ride, the report said.

Over the last two years, launches in the city have decreased 70 per cent and demand nose-dived by almost 30 per cent. Unsold units in the city stood at 2 lakh as of June 30, 2015. 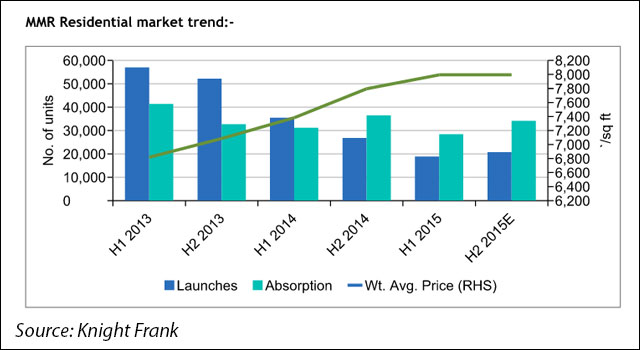 On the office properties front, Mumbai has maintained the momentum of 2014 and recorded office space transaction of 2.5 million sq ft in H1 2015. The report forecasts that absorption will go up by 20 per cent in second half to 5.8 million sq ft.

The market has maintained the momentum in office space which started in 2014 on the back of strong fundamentals in the economy.

Samantak Das, chief economist and national director - research, Knight Frank India, said, “Going forward, we expect Mumbai to clock office transactions of 7.7 million sq ft during 2015. The residential market, on the other hand, is still reeling under tremendous pressure with the drastic drop in new launches at the back of falling demand. The recovery of the residential market does not seem eminent until (end of) 2015 and we expect sales to be in the range of 63,000 units which is marginally below levels seen in 2014.”

India's biggest residential realty market by size, NCR, continues to reel under pressure with sales going down by 50 per cent year on year and new launches dropping by a whopping 68 per cent in H12015, according to the half yearly report of Knight Frank.

However, sales picked up by 18 per cent sequentially in H1 but there wouldn’t be any respite for developers as sales are expected to be muted in the coming quarters.

The report also observes that muted sales has led to price stagnation and pegs sales at 15,000 units in the coming two quarters. It cites policy fallacies and project delays as probable reasons for the poor performance of the market.

Gurgaon, which is known for catering to upper-middle class, saw a considerable supply under affordable segment with almost 91 per cent of the units launched under Rs 2.5 million. 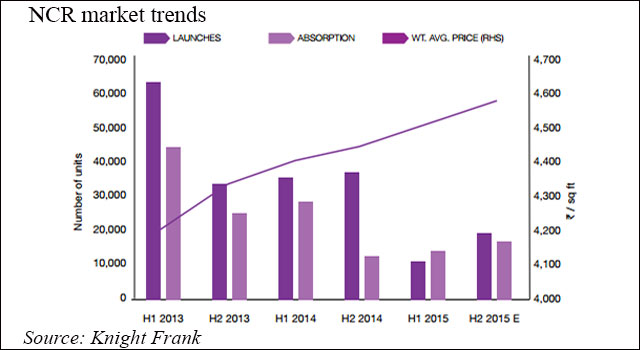 Much in line with the national trend, even when absorption is at a all-time low, it surpassed supply in the first half of 2015 in NCR for the first time in the last five years.

“Taking cognizance of the market, developers will keep new launches in check in the second half of 2015. We estimate new launches to stay below 20,000 units in the second half, with stagnation in the weighted average prices. The delays in projects have made buyers cautious of defaulting developers. Until they are fully convinced, the buyer will continue to assess the project and the developer before purchasing the property, and this is where the developer’s brand and credibility will come into play,” said Mudassir Zaidi - national director, residential agency, Knight Frank India.

On the commercial front, the city has maintained momentum of 2014 and clocked absorption of 3.7 million sq ft in H12015. E-commerce players account for 16 per cent of the total absorption with Snapdeal, Zomato and Lenskart as key occupiers.

Small-size deals have dominated office transactions with occupiers taking space in the range of 5,000-12,500 sq ft. As a result, vacancy level has gone below 10 per cent in some of the key micro markets resulting into an upward pressure on lease rentals, the report said.

The outlook for the second half is positive and office leasing is expected to hold steady in the coming quarters of 2015.

Rajeev Bairathi – executive director, north and capital markets, Knight Frank India, said, “The weighted average rentals in NCR are forecasted to inch upwards by an average of 3 per cent to 5 per cent from H1 2015, while quality office space in PBD Gurgaon’s Zone A and B will continue to see rental appreciation owing to their primacy and locational advantage, which will appeal to occupiers looking for good quality office spaces. We expect this trend to continue as the occupier sentiment improves with the improvement of broad macro indicators in the economy leading to a further upward pressure on rentals.”