To ensure an uninterrupted supply of urea, the most commonly used fertiliser by farmers in India, the National Democratic Alliance government last week set up a committee led by Amitabh Kant, chief executive officer of Niti Aayog, to give recommendations on decontrolling urea imports.

Such a step will also prevent its sale in the black market and comes in the backdrop of growing farm distress in the country, given two successive years of below normal monsoon.

“The ministry of finance, along with chief economic adviser Arvind Subramanian, is actively pursuing de-canalisation of urea imports and have held several rounds of meetings with officials from the Prime Minister’s Office (PMO) and the fertiliser department,” a government official requesting anonymity told VCCircle. 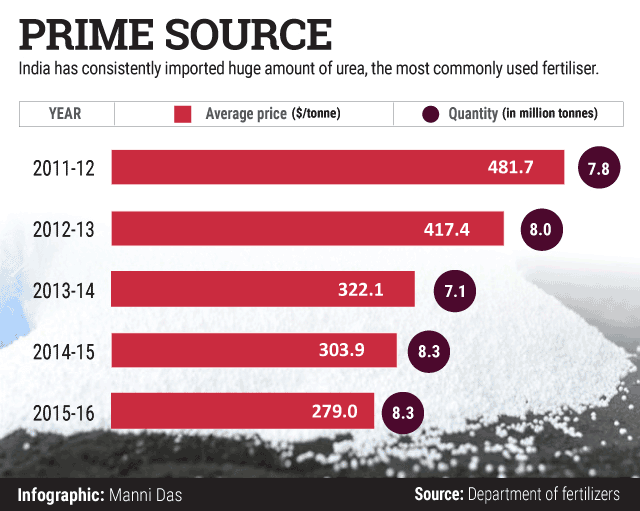 Another government official, who also didn’t wanted to be identified, confirmed the development and said that other committee members include revenue secretary Shaktikanta Das and the chief economic adviser.

India imports urea mainly from China and Iran with total imports at 8.309 million tonne (MT) during the current financial year at an average price of $279.02 per tonne, lowest in the last five financial years. The de-canalisation or decontrolling of urea imports is being talked about at a time when urea prices have come down globally. Last year, urea prices were around $304 per tonne.

The Union budget presented last month focused on the rural economy with an emphasis on agriculture and a goal of doubling farmers’ income in the next five years. Arguing for reforms in the fertiliser sector, the Economic Survey 2015-16 also pitched for de-canalising urea imports.

“The process would increase the number of importers and allow greater freedom in import decision and will allow fertiliser supply to respond flexibly and quickly to changes in demand,” the survey had pointed out.

The committee will soon hold its first meeting and will look into various facets of decontrolling urea imports, said the first government official quoted above.

The Economic Survey also categorically said that the de-canalisation process would be timely as climatic fluctuations are making it much more difficult for governments to forecast agricultural conditions and centrally manage supply. “This would reduce the likelihood and severity of shortages, decrease black marketing and thereby benefit small farmers,” it added.

The Bharatiya Janata Party-led government in the Union budget 2016 also announced that direct benefit transfer of fertiliser subsidy will be soon undertaken on a pilot basis in selected districts across the country.

Analysts, however, believe that de-canalisation of urea has its own merits and demerits.

“While de-canalisation will level the playing field for the private players, it may not translate into subsidy savings for the government of India as the bargaining power of a fragmented importer base will be lower compared with the existing three canalising agents,” said K. Ravichandran, senior vice-president and co-head, corporate ratings, Icra Ltd.

He added that as the farm gate price of urea continues to be way below import parity prices, any savings on imported urea prices, will directly benefit government finances in terms of lower subsidy outflow.

Queries emailed on 28 March to the ministry of chemicals and fertilisers, the ministry of finance, the PMO and Niti Aayog remained unanswered. STC, MMTC and IPL also did not respond to queries sent by VCCircle.

India’s demand for urea in 2015 was 31 MT out of which around 8 MT was imported. According to the current practice of urea import, it generally takes 60-70 days to for urea to reach consumer centres once the fertiliser department decides to import.

“These delays can exacerbate shortages, and are particularly costly during the peak demand period when timely availability of urea is essential for proper plant growth and farmers are thus pushed to purchase in the black market,” the Economic Survey noted.

The government made a provision of Rs73,000 crore on account of fertiliser subsidies in the Union budget of 2015-16. Nearly 70% of this amount was allocated to urea, accounting for the second largest subsidy after food.