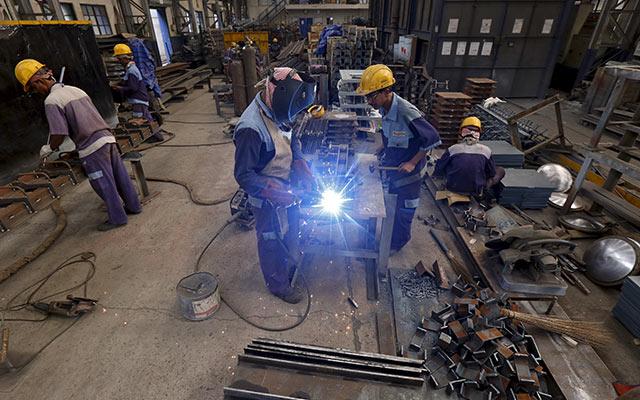 Indian factory activity returned to modest growth in January, bouncing from a contraction in December triggered by the government's scrapping of high value banknotes, a business survey showed on Wednesday.

Compiled by IHS Markit, the Nikkei Manufacturing Purchasing Managers' Index rose to 50.4 in January from 49.6. A reading above 50 indicates expansion.

In a sign factories have started the year on a better footing, a sub-index measuring new orders also nudged back above the breakeven mark, with domestic demand driving the pace as export orders remained in contraction.

"January saw only modest increases in order books, production and buying levels, but the quick rebound will be welcome news to policymakers," said Pollyanna De Lima, economist at IHS Markit.

"Improving confidence among firms bodes well for the outlook, with the expansion in manufacturing output likely to pick up pace in coming months."

The cash crunch is expected to hurt the economy in the October-December quarter of 2016, with economists predicting growth slowing to a near 3-year lows of 6.5 percent.

In December, the Reserve Bank of India unexpectedly left its key policy rate unchanged at 6.25 percent, opting to wait before judging the full effects of the currency ban.

But India's central bank is expected to go through with a rate cut in its meeting next week, with 29 of 46 economists in a poll conducted over the last few days expecting a 25 basis points cut.

India's government will unveil its budget on Wednesday and is expected to try and boost economic growth through reducing personal income and corporate tax as well as higher public investment.