How will SoftBank, Flipkart ESOP holders and others be taxed in Walmart deal?

The world’s largest retail company is acquiring a majority stake in India’s largest e-tailer in the largest e-commerce deal in the world. ‘Large’ is, indeed, the best word to describe Walmart Inc.’s acquisition of a 77% stake in Flipkart for a staggering $16 billion.

For a deal this big in size, the stakes are visibly even bigger. The deal involves a transfer of stake in the Singapore parent Flipkart Pte. Ltd, which owns Flipkart India, by various resident and non-resident investors to the US-based corporation.

From prolonged commercial negotiations to ensuring smooth exits of multiple investors, a deal of this nature entails regulatory compliances, and complex legal and taxability challenges in various jurisdictions.

Let’s analyse the possible tax concerns of the parties involved, from an Indian regulatory point of view.

Amongst various investors who hold a minor stake in the Singapore parent company of Flipkart, major chunks are held by Tiger Global, SoftBank, Naspers, Ebay and Accel Partners. The primary tax liability of shareholders, foreign and resident both, as such, would be taxability of their capital gains arising out of the share transfer.

The table below explains the short-term and long-term capital gains tax liability (STCG and LTCG) on investors, as also the tax benefit they would get, if any, under the Double Taxation Avoidance Agreement (DTAA) that India has signed with some countries such as Mauritius. 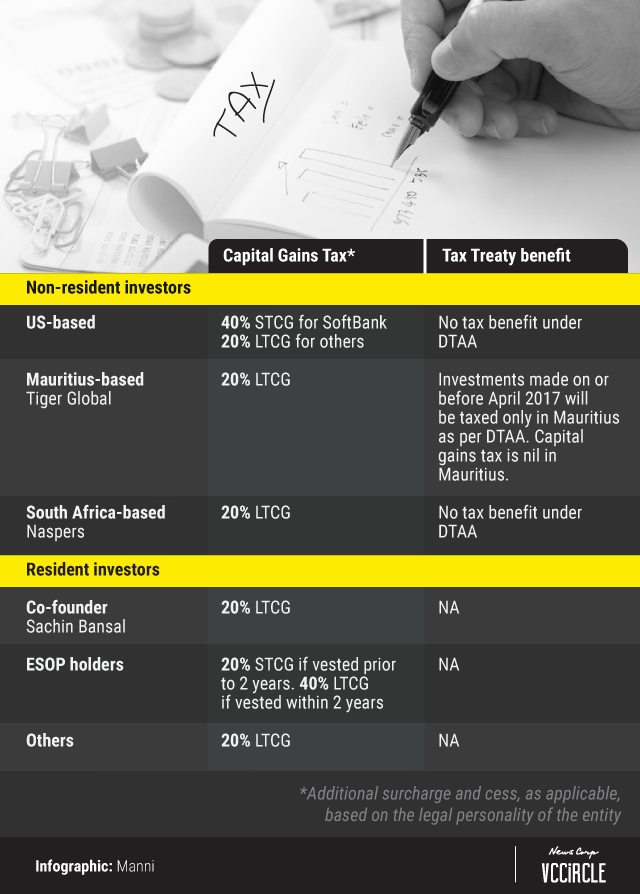 a) Indirect Transfer: This is by far the most critical issue. Taxability (under Indian laws) of non-resident investors in relation to a sale of the shares of the Singapore entity will trigger at the first instance under Section 9(1) of the Income Tax Act of 1961.

According to this section, any income accruing or arising, whether directly or indirectly, through or from any property in India, or any asset or source of income in India – shall be deemed to accrue or arise in India. This provision would also determine the question of applicability of DTAAs depending on whether there is or not any tax liability in India at all.

Going by this infamous retrospectively applicable amendment, notified as a result of the Vodafone tax case, taxability in India is attracted if the value of assets in India is greater than Rs 10 crore and if it represents at least 50% of the value of all the assets owned by the foreign parent.

Technically, while the existing investors in this case own stake in the Singapore parent – Flipkart Pte Ltd – more than 50% of the value of the Singapore entity is derived from its Indian business. It appears that the 50% test has been triggered in this deal.

Hence, the income arising in this case may be deemed to arise in India, and thereby be taxable in India.

b) Treaty Benefits: Considering that the underlying shares in this case are not of an Indian company, but of a Singapore based company, prima facie it appears that the applicability of DTAAs may not be relevant.

However, once the Indirect Transfer provision deems the income as Indian income under Section 9(1) as said above, the transferees become taxable in India. This in all likelihood will trigger the application of respective tax treaties for benefits, if any.

As mentioned above, the India-US and India-South Africa DTAAs confer no exemption from capital gains tax. Under the India-Mauritius DTAA, investments made before 1 April 2017 will be taxable only in Mauritius. It is interesting to note that Mauritius has no capital gains tax. This means only Mauritius-based investors seem to have treaty benefits at the moment (for investments made before April 2017).

In fact, it has come to attention that the Central Board of Direct Taxes has already written to the Indian arm of Walmart seeking details of its withholding tax liability, and assured assistance in computing tax liability if required.

d) Carry Forward of Losses: Another important caveat is that Flipkart in India has been making losses. While such losses can be carried forward to the subsequent years – according to Section 79 of the Act, in cases where more than 51% of a company’s shareholders change hands, losses cannot be carried forward and set-off.

However, again, as noted before, the shares being transferred in the case belong not to an Indian entity, but to a Singapore-based entity. Hence, applicability of this provision itself is also not clear.

Regardless, since the ownership of the Indian entity wouldn’t change hands, it may after all be allowed to carry forward its losses to future years.

In the first case, the difference between the fair market value (FMV) of the shares and the exercise price is added to the assessee’s income and taxed under the head ‘Income from Other Sources’.

In the second case, capital gains tax applies depending upon the duration of holding of the assets. However, it is to be noted that in case the shares are bought back by the company (as may be proposed by Flipkart), the tax liability is on the company and not on the assessee.

Due to the high values involved, the deal is likely to involve significant tax collection for Indian authorities.

Estimating the liability of each shareholder typically would depend on various factors – like the origin and registration country of the investors, duration for which the stake was held, and the respective DTAAs, as interpreted by the tax authorities along with Section 9(1).

Having said that, it may be noted that Indian tax authorities also have the power to enforce the recently notified General Anti-Avoidance Rules to reclassify various portions of the transaction and raise tax demands. It would be interesting to see how the interplay between the authorities and various parties involved pans out in the coming days.