Here’s a snapshot of key Chinese investors in Indian startups

Earlier this month, Swiggy raised $43 million in a funding round amid reports of food delivery companies in India facing a plunge in their daily orders due to the lockdown imposed by the government to fight the coronavirus pandemic.

The funding round was led by existing investor Tencent with the Chinese firm bringing in almost half of the total amount. In hindsight, the cheque from Tencent gains more significance because future funding for Indian startups faces uncertainty following a government notification on foreign direct investment (FDI) norms.

The government said that FDI in Indian companies from neighbouring countries will now require its approval as it aimed to curb “opportunistic takeovers” of domestic firms during the coronavirus pandemic.

While the government did not specifically mention China, the new rule seems to be aimed at the Asian giant.

In this backdrop, VCCircle takes a quick look at the amount of Chinese money that has been pumped into Indian startups over the years.

The trend of Chinese businesses making serious investments into Indian companies began in 2015 when e-commerce giant Alibaba made a handful of investments in companies such as Snapdeal and Paytm.

Chinese tech investors have put an estimated $4 billion across over 90 Indian startups operating in various sectors, according to a February report by foreign policy think tank Gateway House, Indian Council on Global Relations. 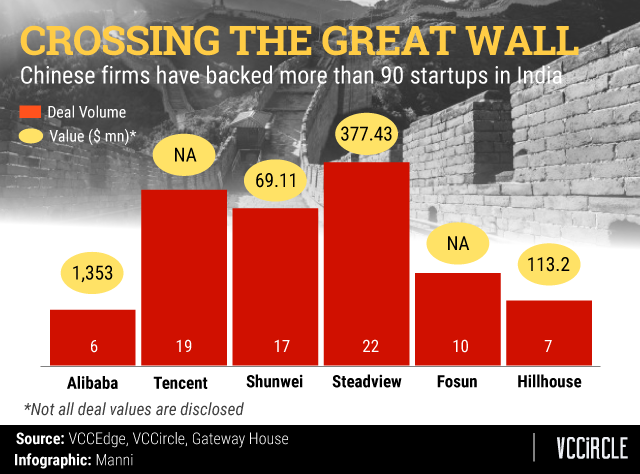 So prominent has been their presence that 18 out of India's 30 unicorns (startups with $1 billion valuation) had Chinese investors. The unicorns range from Flipkart which was acquired by Walmart in a $16 billion deal in 2018 to the newest unicorns such as Dream11, Delhivery and Rivigo.

Chinese investors have come in the form of both corporates such as Alibaba and Tencent and pure-play investment firms such as Shunwei Capital and Hillhouse Capital. 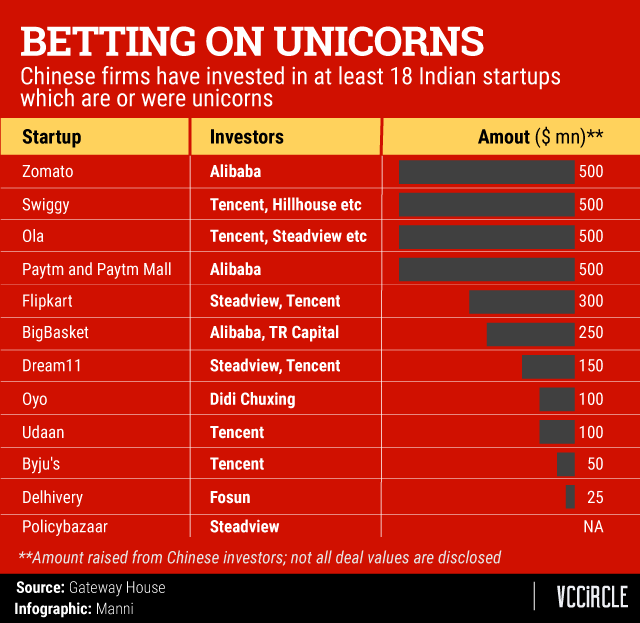 While Alibaba has made concentrated bets it has pumped billions of dollars in some of India's well-known startups such as Paytm and Zomato. Tencent, on the other hand, has been actively striking new deals and pumping in enormous capital in its portfolio companies.

Among typical investment vehicles, venture capital firm Shunwei Capital, a sister concern of Xiaomi, has been actively striking over 17 deals since 2016 in startups such as ShareChat, Cashify and Meesho.

Beyond these names other investors from the region such as CDH Investments, Morningside Ventures, Legend Capital and China insurer Ping An's fund have also made their presence felt in India's startup ecosystem.

Just earlier this month, Legend Capital, a venture capital firm, came in as the new investor in the interactive online tutoring platform Vedantu. It also led the round with a contribution of $10 million.

The government's new rules could now delay deal-making from Chinese investors at least as they wait for clarifications even as some stakeholders in the industry think that this was warranted albeit with some exceptions.