Flashback 2010: A Look At Deals & IPOs That Shaped The Media Industry

It is time to recap some of the most significant events in the Indian media industry, which experienced an eventful 2010 after a period of lull.

Two key trends that marked the year for the industry were consolidation and a rise in investments and deals in the regional media space. While private equity fund-raising activity was marginally down in 2010 (as compared to 2009), it did witness a lot of top private equity funds betting on this vibrant space. Here are some key trends that defined 2010 and may well be an indicator to the deal-making environment in Indian media through the next year.

Away from the centres

If the theme of 2009 was Indian media's impressive escape from the global downturn, 2010 saw continued growth, mostly from the regional media.

India is one of the largest media markets in the world. Sample these statistics: Over 500 channels, 135 million television (TV) homes, 600 million viewers, 410 million newspaper readers and about 3.9 billion movie tickets sold. Even so, the Indian media story is largely an underpenetrated market.

The long-term drivers of the Indian media growth story remain intact with media consumption on the rise due to changing lifestyles and income. It is also becoming clearer that the next phase of growth will emanate from rural or regional media as consumption increases and media penetration leads to further consumerism.

Going by the macro trends observed, there is an increasing penetration of TV and print in tier II cities, along with more radio towns to be licensed. Only 30 per cent of TV sets are sold in metro and tier I cities, 70 per cent of DTH connections are from non-metro towns.

These consumers are best reached by langumedia (print in the North and West and TV in the South), which explains the dream run that regional media has had over the past two years. This is also evident going by a few listed language media companies. For example, Sun TV's April-December 2010-11 revenues grew by more than 42 per cent and Jagran's April-December 2010-11 revenues grew by 15 per cent year on year.

In one of the biggest deals, PE firm Blackstone infused $50 million (Rs 225 crore) into Jagran Media Network, which holds a 55 per cent stake in the listed entity Jagran Prakashan, owner of Dainik Jagran. Also, in March 2010, Jupiter Entertainment Ventures acquired a 26 per cent stake in Kannada Prabha for $14.46 million (Rs 65 crore) from Express Publications (Madurai).

Private equity action in media either stagnated or saw a contraction. There were nine deals worth $131.9 (Rs 594 crore) million in 2010, as compared to eight deals worth $249.42 million in 2009. And in 2008, there were 14 deals amounting to $521 million. Though the capital markets improved from 2009, there was not much private equity action for this year as a lot of PE firms preferred to stay on the sidelines owing to high valuations.

In another transaction, Mauritius-based private equity fund SIDOFI Communication Investment acquired nearly 10 per cent stake in the Kerala-based broadcaster Asianet Communications (backed by leading broadcaster Star TV India). A significant step up in the valuation for this deal indicates the unwavering faith of the PE funds in the phenomenal growth of the southern cable television market.

What makes the case stronger for the language media is the fact that those who invested in the mainstream burnt their fingers. In the second round of capital infusion, New Silk Route, a PE firm founded by blue chip investors Rajat Gupta and Parag Saxena, invested $12 million (Rs 54 million) in INX Media. This was to recapitalise INX Media. Four PE investors, who committed $170 million three years back, are now the major shareholders after the original promoters Peter and Indrani Mukerjea made a sudden exit from the company in 2009. 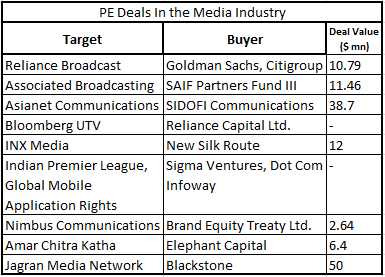 The M&A activity in the media space saw an upward surge from nine deals worth $178.35 million in 2009 to 19 deals amounting $197.94 million (Rs 890.7 crore) in 2010. This was largely buoyed by the fact that a host of foreign media players are looking at strengthening their position in Indian media or picking up distressed plays. Moreover, there are a few Indian media companies undergoing domestic consolidation or restructuring.

One of the most active players on the M&A side was Astro All Asia Networks buying GETIT Infoservices for $21.85 million (Rs 98 crore), NDTV Lifestyle Holding for $40 million(Rs 180 crore) and Turmeric Vision, the television company owned by celebrity chef Sanjeev Kapoor and his wife Alyona Kapoor.

As part of consolidating its present genres, Zee Entertainment (it had already acquired eight regional channels from Zee News and two from its subsidiary ETC Networks in 2009) bought into Taj Television (promoters of Ten Sports) by increasing its stake to 95 per cent from 50 per cent. Zee also bought distressed Hindi GEC 9X (of INX Media) making the most of the opportunity. The deal not only gave it Hindi content, which it can capitalise on by putting it on its international network, but also led to tax savings because of the accumulated losses on 9X's books. 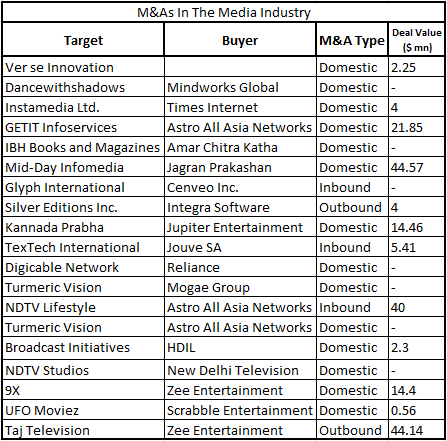 The direct-to-home industry was on a roll in 2010 with the calendar year full of sporting events and DTH operators, spending more than $130 million in advertising and promotions.

What is even more heartening is that 70 per cent of the net additions on the DTH platform came from outside the top 100 towns of India. The latent demand for a better TV-viewing experience is percolating to the sales of these DTH operators.

India's largest DTH operator, Dish TV, is all set to cross the 10 million (gross) subscriber base by the next quarter. It added over 1.8 million subscribers between January and September 2010. While profitability is some distance away, the stock market has already rewarded Dish TV by doubling its stock price in the past six months. Industry participants are confident of adding another 10-12 million subscribers in 2011. The question now is: will cable companies take cognisance of this or go slow on their customer acquisition while DTH creams the market?

The BSE benchmark index - Sensex - gained 3044 points to end the year at 20509, moving up 17.4 per cent on the back of a resilient domestic economy, India's demographic dividend, strong consumer demand, less reliance on exports, benign oil prices and strong global liquidity.

Though few in number, media companies also had a decent run at the capital markets. The Hindi language publication arm of the Hindustan Times Group, Hindustan Media Ventures (HMVL) made a reasonable debut on the stock exchange, listing at a premium of around 3 per cent.

Eros International Media, the Indian movie distribution arm of AIM (Alternative Investment Market)-listed Eros International, made a blockbuster debut on local stock exchange (listing at 22 per cent premium on the issue price of Rs 175). The Hyderabad-based animation firm, DQ Entertainment, received a robust response from investors. The issue was subscribed 86.33 times on the last day of issue.

(The article was first published at afaqs.com)