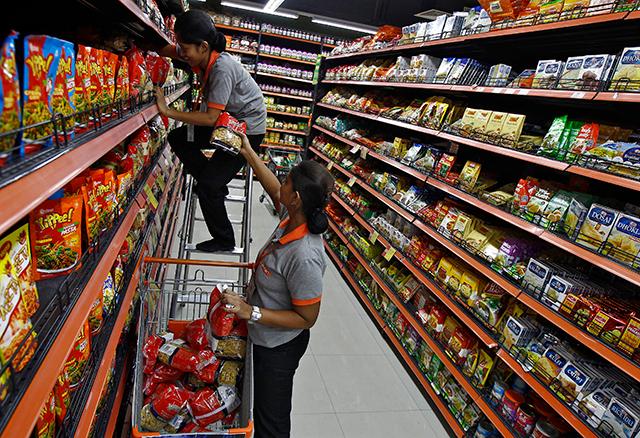 2016 was a mixed bag for the Indian economy, particularly the consumer sector, dragged down by sluggish rural demand and the negative surprise of demonetisation. This was despite GDP growth accelerating in the second quarter of the financial year to 7.3%, on the back of a stronger performance by the farm sector.

Experts believe 2017 will not offer any immediate respite, with demonetisation taking a toll on vital sectors like manufacturing, consumer goods and services, and real estate in the first two quarters. However, the long-term growth story of these sectors is intact, and the second half of the year is likely to see an uptick.

The implementation of the government's ambitious Goods and Services Tax (GST) is likely to bring glad tidings for consumer goods companies and augment demand, and boost manufacturing and job-creation.

Organised retail is likely to continue its good run on the back of the high note ban, and the compulsion to go cashless will also lead neighbourhood kirana shops to start using e-wallets and accepting card transactions. That may make it a watershed year for e-wallet companies that have already seen an unprecedented increase in activity of late.

Let’s take a quick look at the probable developments that will impact the consumer sector in 2017.

The common man in general, and the rural population in particular, has borne the brunt of the Centre’s demonetisation move. Though the government maintains that the situation will improve soon, experts doesn’t seem very optimistic.

“Reduced cash spending is expected to adversely impact consumer confidence and dampen spending in Q416 (Oct–Dec) as well as next year’s initial quarters,” said Rajat Wahi, partner and head (consumer markets), KPMG. However, another analyst predicts better consumer sentiment by the second half of 2017. “Jan-March 2017 quarter would likely see the continued adverse impact of demonetisation, but demand is more likely to recover after that,” said Pinaki Ranjan Mishra, partner and national leader for consumer practice, EY.

Investors, who had otherwise tightened their pursestrings almost a year ago, also seem confident. “Remonetisation will start in Q1 of 2017 itself. The consumer wallet is likely to get fatter with government sops and tax breaks which will drive more consumption across all income classes,” said Hemendra Mathur, former managing director of venture capital firm SEAF.

GST: A game-changer for FMCG

The Goods and Services Tax is expected to bring relief to the industry from high taxation and consequent higher costs. Companies, especially those in the high tax bracket, are expected to benefit a lot from the implementation of GST.

“This will bring businesses into the tax bracket while lowering the tax impact and bringing more transparency in the system. As the system stabilises, companies are likely to pass on the benefits of tax saving to consumers, making them the ultimate beneficiaries,” said Mishra.

Besides, GST is also expected to help consumer goods companies in terms of supply chain efficiencies. “The implementation of a unified tax code is expected to reduce logistics costs for FMCG companies, as their decision of setting up warehouses would be driven by operational efficiencies rather than the current practice of leveraging lenient tax policies of the state,” said Wahi.

Vivek Gambhir, managing director of Godrej Consumer Products Ltd, hails GST as a “game changer” for the sector, saying it will create greater demand for products, boosting manufacturing and job-creation in turn. He said that GST will force people to pay indirect taxes, a major cause behind black money.

Though there are some concerns around chaos in the initial stages, leaders from the FMCG industry applaud the bill. “There might be some disruption in the short term, but it’s a right step in the right direction and will have a positive impact on the economy and businesses in the long run,” said Lalit Malik, the chief financial officer of Dabur India Ltd.

The high note ban has hit unorganised retail hard, particularly neighbourhood retailers as most of their transactions are in cash. At the same time, organised retailers and modern trade outlets have seen a surge in orders as consumers switch to shopping using cards.

Since the cash crunch is unlikely to resolve anytime soon, the good run of modern retailers, such as Future Group’s Big Bazaar and Godrej’s Nature Basket, will continue at least in the first two quarters of 2017. The compulsion to go cashless will also lead neighbourhood kirana shops to start using e-wallets and accepting card transactions.

EY's Mishra says online retail is expected to grow at 25% CAGR over the next five years. “The propensity to buy groceries, FMCG products, furniture, and home improvement products is also seeing a rise,” Mishra said.

The year 2015 saw several acquisitions by Future Group, the second-biggest brick-and-mortar retailer after billionaire Mukesh Ambani-led Reliance Retail Ltd. The retail chain expanded its brand presence and footprint through the acquisition of numerous small regional brands in 2016. The Kishore Biyani-led company may continue with its inorganic growth plans in 2017 to fight the growing clout of online retailers such as Amazon more effectively.

The space is also expected to see another major brand making its debut in the primary market this year. Avenue Supermarts Ltd, which runs hypermarkets and supermarkets under the D-Mart brand, might be the first multi-line retail company to get listed in almost a decade.

Though demonetisation has negatively impacted auto sales since November, sales of four-wheelers are expected to rise on the back of improving consumer confidence and new model launches. It is assumed that undeclared income is not very often used to buy small cars, two-wheelers and commercial vehicles, so sales of these vehicles are likely to stabilise quickly once liquidity is restored in the system.

Those looking to buy gold jewellery in the New Year may find solace in the fact that prices have fallen since demonetisation. Hence, sales at jewellery retailers may see a surge, although at the cost of their margins.

Hospitality may not see sales improving at least during the first two quarters of 2017, as people may restrict spending to daily essentials. But fashion apparel is unlikely to suffer since most transactions in the space happen at big stores and supermarkets, where cashless transactions are already common.