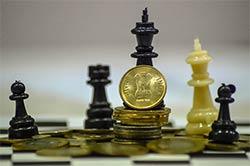 The Reserve Bank of India has been keen to attract foreign investments into banks and earlier this year eased some of the ownership rules to attract more buyers.

Catholic Syrian bank, based in Kerala, filed for an initial public offering of nearly $80 million last year, but ended up not listing because of tough market conditions.

"We got the permission (from RBI) yesterday and expect to close the deal over the next three to four months," said S. Santhanakrishnan in a phone interview.

"The next step for us is to appoint valuers to reach a proper valuation for the 51 percent stake after which we will start negotiations," which would be followed by seeking final approval from India's banking regulator, Santhanakrishnan said.

A potential investment from Fairfax India Holdings Corp, a unit of Fairfax which is controlled by Canadian businessman Prem Watsa, raises hope that more foreign players will invest in private lenders in India, where about half the population still has no access to formal banking.

"RBI and the government are aware of fact that they need to make the Indian banking system more vibrant and banks in India would require more capital," said an analyst at a domestic brokerage.

"This is a welcome move. My understanding is that we might see more such approvals by the regulator."

Although public sector banks continue to be dogged by bad loans, private rivals are less constrained by bad assets and shares have risen this year on expectations they will benefit from an improving economy.

Two of the biggest gainers among private banks have been Yes Bank Ltd and HDFC Bank Ltd, whose shares have risen 59 percent and 11 percent, respectively, this year.