Indian factory activity gained momentum as new orders—both domestic and foreign—rose at a faster pace last month with the Nikkei manufacturing Purchasing Managers Index (PMI) rising to a six-month high of 52.7 in July against 51.3 in June. 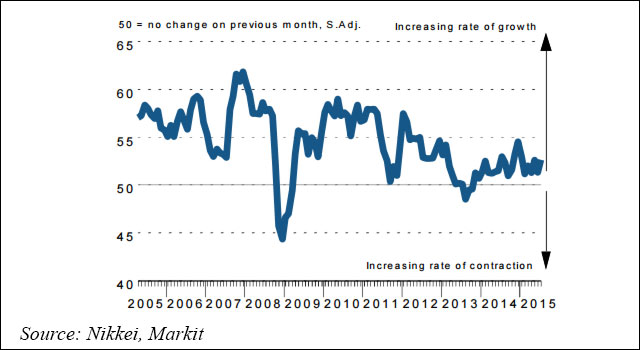 Nikkei manufacturing PMI, previously known as HSBC manufacturing PMI and compiled monthly by financial information services firm Markit, measures economic health of a sector based on surveys of private sector companies. A reading of above 50 on the index denotes expansion. The manufacturing output in the country expanded for the 21st successive month. While domestic demand continued to grow, foreign demand i.e. new business from abroad rose at the quickest rate since February.

While growth was recorded across all three key categories, the uptick wasn't able to prop up employment figures as Indian manufacturers continued to cut workforce numbers in July.

“Although the latest data suggest that the manufacturing upturn gained traction, worries regarding the labour market persist. Continued job shedding highlights the concern felt by businesses towards the outlook, with firms failing to increase workforce numbers to any great extent since early 2014," said Pollyanna De Lima, economist at Markit.

The latest PMI report also highlighted building up of cost pressures compared with the previous month, but the rate of inflation was only marginal and well below the long-run trend.

While the early factory activity indicator paints a rosy picture for the government, the stalled Parliamentary session and the government's inability to pass key legislation can play a spoilsport in the long run.

The official data on industrial output is compiled with a two-month lag. The eight core industries, a lead indicator for industrial production comprising nearly 38 per cent of the weight of items included in the Index of Industrial Production (IIP), rose 3 per cent in June over the year-ago period, lower than the 4.4 per cent growth recorded in May. The official IIP numbers for June will be available by next week.

Markets have been calling for another rate cut from RBI, which is scheduled to meet on Tuesday, but a survey conducted by VCCircle of 21 economists showed that the bank may hold on to rates for this meeting while it is likely to snip the policy rate by 25 bps by the end of this year.