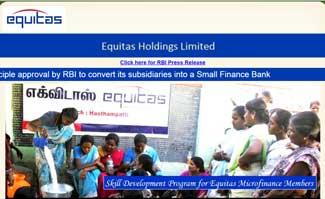 Equitas Holdings Ltd, the holding company for the fifth-largest microlender in the country, made a blockbuster debut on the stock market on Thursday with its shares listing 31 per cent higher than the initial public offering price.

Equitas is the first company to go public among those that have received in-principle approval from the Reserve Bank of India to start a small finance bank, a new category of lenders allowed by the central bank to push financial inclusion in the country.

The strong debut comes after the Equitas IPO was oversubscribed 16 times earlier this month, despite starting on a slow note, as institutional buyers bid for around 15 times of the quota reserved for them.

The IPO raised about Rs 2,170 crore. This included Rs 720 crore through a fresh issue of shares and the remaining via a stake sale by founder PN Vasudevan and a bunch of private equity investors and International Finance Corporation. Of the Rs 720 crore, Equitas plans to use about Rs 600 crore toward investment in subsidiaries to augment their capital base.

In its draft prospectus filed with the Securities and Exchange Board of India last October, Equitas had sought to raise up to Rs 600 crore. Earlier this year, it some terms of the IPO.

Ahead of the IPO, the company had raised Rs 653 crore from 16 anchor investors by allotting 5.93 crore shares at Rs 110 each, the upper end of the price band. Anchor investors included Wipro chairman Azim Premji's private investment arm PremjiInvest and a host of mutual funds and insurance firms.

Equitas is a holding company and operates through three subsidiaries. The units are engaged in microfinance lending and also offer mortgage loans, vehicle loans and loans to micro and small enterprises.

Edelweiss, ICICI Securities, Axis Capital and HSBC were the merchant bankers for the IPO.