Modi’s Bharatiya Janata Party-led National Democratic Alliance (NDA) came back to power with a haul bigger than it had in 2014, as its sharp focus on national security and the promise of a stable government in the wake of a weak opposition resounded with voters across India.

The NDA is on course to win a near two-thirds majority in the 543-member Lok Sabha, with 344 seats, according to data from the Election Commission of India. The BJP, on its own, was leading in nearly 302 seats by late evening. That’s 20 more than it had won five years ago. 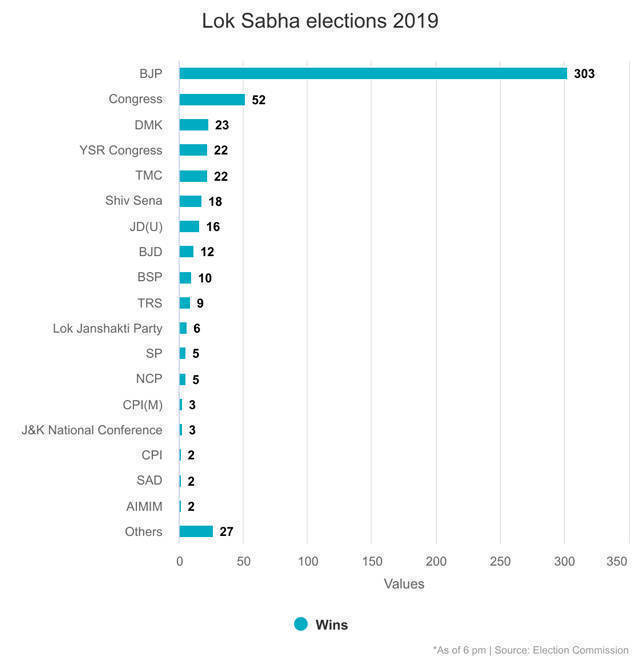 The principal opposition party Congress, on the other hand, was leading in just 56 seats on its own and less than 100 along with its allies in the United Progressive Alliance (UPA).

Clearly, the BJP’s focus on national security after India launched aerial strikes against Pakistan following a suicide bombing attack in Jammu and Kashmir in February managed to overshadow the Congress attempt to highlight the government’s failure to create jobs, ease the farm distress and Modi's mismanagement of the economy.

The election campaign often turned bitter and also polarised voters, with some in the Muslim community even expressing fears that the BJP’s Hindu-first ideology was detrimental to their interests. But on Thursday afternoon, as the scale of the victory became clear, Modi tweeted: “Together we will build a strong and inclusive India.”

The stock markets cheered Modi’s victory. The BSE Sensex jumped more than 2% to cross 40,000 for the first time, before losing all gains on profit-taking to close below Wednesday’s level.

“Removal of political uncertainty is always welcome from the market’s point of view,” said Nilesh Shah, managing director and CEO, Kotak Mutual Fund. “With that uncertainty behind, the market will now focus on steps taken by the government to encourage investment and give push to consumption, which is hitting a soft patch.”

Shah also said the market believes that the stage is set for accelerating growth by reviving investment and supporting consumption growth. “Changing the orbit of GDP growth from current 7% level to a higher level… is what markets are expecting from the second term of the government,” he said. 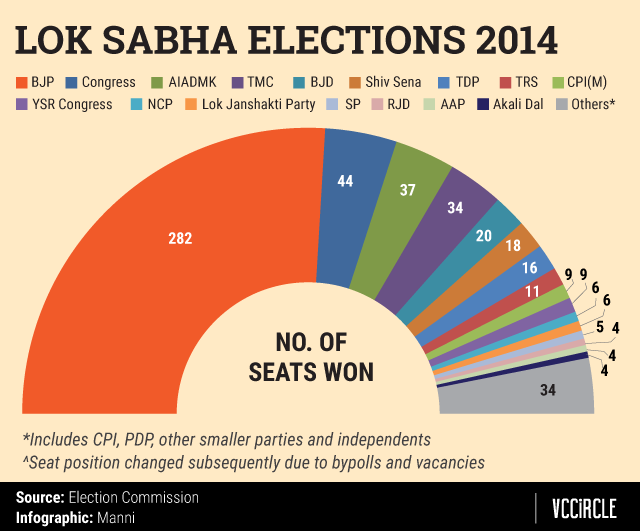 Although the Congress did improve its tally, its gains were only marginal. In fact, the extent of the near total decimation of its political influence in India’s national politics was evident from the fact that it could not even hold on to three large states—Rajasthan, Madhya Pradesh and Chhattisgarh—where it had dislodged the BJP to form state governments just six months ago.

To top it all, Congress president Rahul Gandhi, the scion of the Nehru-Gandhi dynasty, lost in the family bastion of Amethi in Uttar Pradesh, although he won from Wayanad in the southern state of Kerala. Apart from Gandhi, almost the entire top rung of the party leadership including Digvijaya Singh, Jyotiraditya Scindia, Milind Deora, Shatrughan Sinha, Sheila Dikshit and Pawan Kumar Bansal lost.

The BJP essayed a completely different story. Not only did it sweep these three states, it also managed to hold on to its traditional bastions of Gujarat and Maharashtra.

But the BJP’s performance in these five states was not the real story of the 2019 general elections. The resilience of the ruling party’s electoral machinery was most evident in Uttar Pradesh, West Bengal, Odisha and Telangana.

In UP, India’s most populous and electorally most significant state that sends 80 lawmakers to the lower house, the party appeared on course to win a little less than 60 of the 71 seats it had won in 2014.

The BJP’s 19-seat haul in West Bengal was perhaps the biggest shocker of this election. Not only did the party manage to halve the incumbent Trinamool Congress’ tally in the lower house, it has also now emerged as the principal challenger to the Mamata Banerjee-led party in the state that goes to polls in 2021.

The other story of the 2019 election was the emergence of another political heir, YS Jagan Reddy, on the scene in Andhra Pradesh. Not only did he oust the incumbent chief minister N Chandrababu Naidu, his YSR Congress Party, which was borne of the Congress, also won almost all the 25 Lok Sabha seats in the state.

The only chief minister who managed to hold his ground against the BJP’s onslaught was Odisha’s Naveen Patnaik, whose party won another term in the state. However, at the national level, Patnaik’s Biju Janata Dal ceded some ground to the BJP, which won eight Lok Sabha seats in the state, the highest ever till date.