Prime Minister Narendra Modi is likely to get a second term with a majority of exit polls after the end of the seven-phase elections to the Lok Sabha predicting an easy victory for the Bharatiya Janata Party and its allies.

At least seven exit polls gave the BJP-led National Democratic Alliance more than 300 seats in the 543-member Lok Sabha. Five other exit polls estimated that the coalition will surpass the halfway mark of 272 seats but fall short of 300. Voting in one constituency will be held again after election there was cancelled.

The NDA had won more than 330 seats in the 2014 elections, with the BJP alone winning 282 seats, helping make the first majority government in India in three decades. 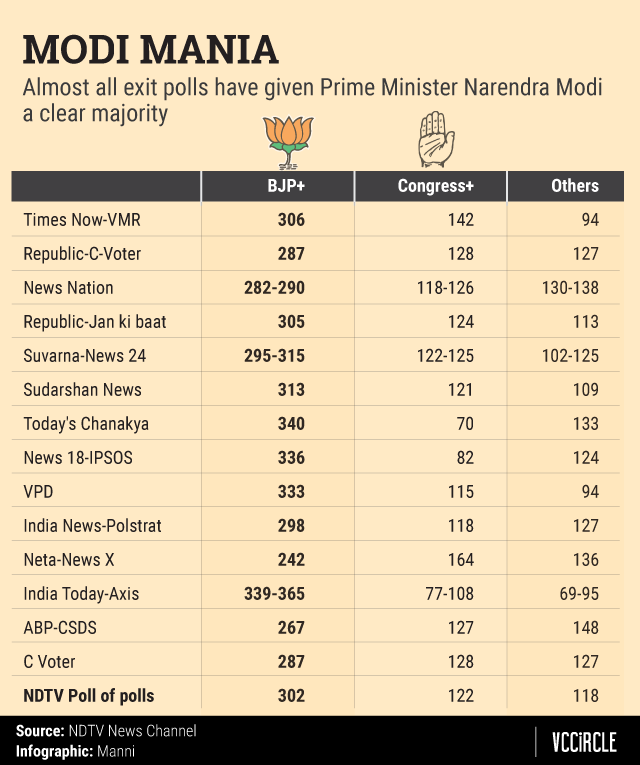 The Rahul Gandhi-led main opposition Congress party is likely to improve its 2014 tally of 44 seats, which was an all-time low, but may not make gains significant enough to pose a challenge to the BJP.

To be sure, exit polls in the past have often got their predictions off the mark, both in India and outside. Some examples where exit polls got it spectacularly wrong include the 2016 referendum in the UK over Brexit. The presidential elections in the US later in the same year that saw Donald Trump win and the just concluded Australian elections, where almost 50 pollsters reportedly got the numbers wrong, are among the other examples.

Even in the 2014 Indian general elections, although most pollsters got the trend right and predicted an NDA victory, only a handful were able to come close to the figure that the winning combine finally got.

But such red herrings haven’t stopped market watchers, including brokerages from predicting a sweep for the NDA, with the SGX jumping around 2% before markets opened on Monday. In fact, there were rumors that exit poll results may have been leaked to some stock market operators on Friday itself when the market closed more than 1% higher.

Citing the exit poll result, Nomura said that they signaled an end to political uncertainty and policy continuity, which it said, is a medium-term positive.

Echoing this view, Credit Suisse said that the markets had been expecting an NDA majority, and could see a rise after the results. Bank of America Merrill Lynch said it expects the next government to focus on lending rate cuts.

The elections to the 17th Lok Sabha were held over 39 days, with the seventh and last phase ending on Sunday. Around 900 million people were eligible to vote in the elections.

Modi’s BJP focused on national security during the campaign for the elections, which had started barely weeks after India launched aerial strikes against Pakistan following a suicide bombing attack in Jammu and Kashmir that killed more than 44 paramilitary personnel.

The Congress and other regional parties sought to focus on the government’s failure to create enough jobs, the distress in the farming sector and Modi's mismanagement of the economy. 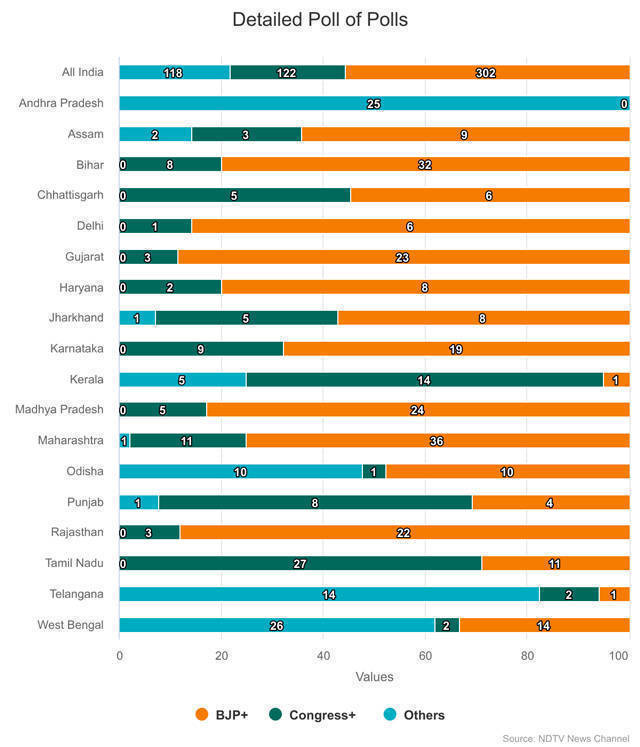 The exit polls show that the NDA is facing some reversals in the politically significant state of Uttar Pradesh, which sends 80 members to the Lok Sabha. But it is likely to offset these losses by scoring massive gains across other states like West Bengal, Odisha, Karnataka and in the Northeastern region.

The BJP is also expected to hold on to its 2014 tally across its strongholds of Gujarat, Rajasthan, Madhya Pradesh, Chhattisgarh and Jharkhand, while it will sweep Bihar and Maharashtra, according to almost all the polls.

If that does indeed happen, it will be a surprising result. This is because not only had the BJP lost crucial state elections in Rajasthan, Madhya Pradesh and Chhattisgarh less than six months ago, but also because there had been reports of large-scale farm distress in Maharashtra, with farmers demanding loan waivers and hundreds of them marching in Mumbai and Delhi.

The exit poll results notwithstanding, leaders of parties opposed to the NDA had been in consultation with each other, in a bid to form a viable post-poll alliance, in the event the NDA did not return to power. While Andhra Pradesh chief minister N. Chandrababu Naidu met Bahujan Samaj Party leader Mayawati and the former Congress chairperson Sonia Gandhi on Sunday, Mayawati herself was expected to meet Gandhi before the actual results are announced on May 23.

This follows a series of meetings between Telangana chief minister K Chandrashekhar Rao has had with leaders from the other south Indian states to try and cobble up a coalition.