Online learning platform Unacademy appears to be on the lookout for new growth areas. The Sorting Hat Technolgies-operated company, on Monday, said it has acquired Rheo TV, a platform that helps professional game streamers livestream their gameplays and monetise those feeds.

As part of the deal, Bengaluru based Unacademy will fully acquire Rheo TV and enable the exit of all existing investors. Financial details of the deal were not disclosed by the company. 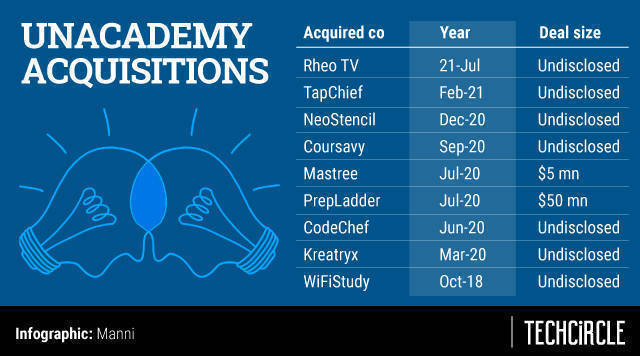 Post the acquisition, Rheo TV founders Saksham Keshri and Prakash Kumar will join Relevel as con-founders. Relevel, a Unacademy Group company, seeks to revolutionise the Indian job market by enabling job-seekers to showcase their skills through tests, and secure employment, according to a statement.

Launched in 2019, Bengaluru headquartered Rheo TV is a game streaming platform that aims to make professional game streaming a mainstream career option in India. It was part of the second cohort at Surge, Sequoia’s 16 month-long flagship accelerator programme for early-stage startups in the Indian and Southeast Asian regions.

The platform claims to have more than 5 million users and over 10,000 live streamers within a year of launch.

Prior to Rheo, Keshri and Kumar co-founded Mojo Times, a video news platform for independent journalists. Previously, they both worked with Unacademy in 2018.

Unacademy was founded by Gaurav Munjal, Hemesh Singh, and Roman Saini in 2015. Started as a YouTube channel by Munjal in 2010, Unacademy is claims to have a network of 50,000 plus registered educators and over 62 million learners.

Rheo TV is Unacademy’s eighth acquisition since March 2020. Earlier this year, it acquired a majority stake professional networking and consulting platform TapChief for an undisclosed amount.

It’s acquitions in 2020 --NeoStencil, PrepLadder, Kreatryx  and Coursavy -- expand its reach in the test-preparation segment. It strengthened its presence in the K12 learning space with Blume-backed Mastree -- offering an exit to the investor in July 2020 -- and the programming segment with CodeChef.