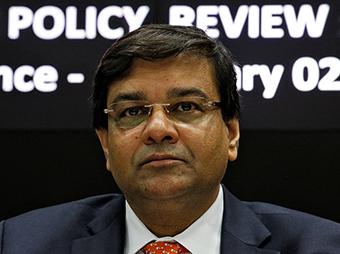 Reserve Bank of India (RBI) governor Urjit Patel has reportedly downplayed the risk of inflation and wants the focus to be on growth.

The Economic Times said on Monday that Patel expressed these views in a meeting with non-RBI economists in his first interaction outside the central bank since taking over on 5 September.

Business Standard, citing a poll conducted among bankers and economists, has said that while the RBI may not cut interest rates this time, a 25-basis-point cut in December is on the cards.

Meanwhile, the central bank has asked the government to appoint a regulator for spot exchanges, the Mint newspaper said in a report. The report said that the RBI’s concerns were raised after it received summons from the Gujarat High Court over a petition regarding the payments scam at the National Spot Exchange Ltd (NSEL).

The RBI, in a letter to the finance ministry, said that although the Forward Markets Commission was the designated agency in respect of trades at the NSEL, the FMC as also the capital markets regulator Securities and Exchange Board of India had denied having regulatory oversight over spot exchanges.

In a separate report, Business Standard said that the government has drawn up a blueprint to deal with sick public sector undertakings (PSUs). The report said that the government’s new approach will be a mix of policy options including revival of some PSUs and closure of others. It may also involve sale of monetizable assets like land and transfer of ownership to willing state governments in certain cases. The report said that while six firms may be closed, a strategic sale of 26 others may be considered.

Meanwhile, India will on 2 October ratify the climate change treaty that it had agreed to in Paris in December last year. This marks a shift in the country’s stance in the recently concluded G20 meeting, in which India had indicated that it may not do the same. India will ratify the treaty ahead of a climate meeting in Morocco.