Delhi’s Connaught Place and Mumbai’s Bandra Kurla Complex (BKC) and Nariman Point have all slipped a tad in a list of the most expensive office markets globally, according to a survey by real estate consultancy CBRE.

The latest survey provides data on office rents and occupancy costs as of September 30, 2015. 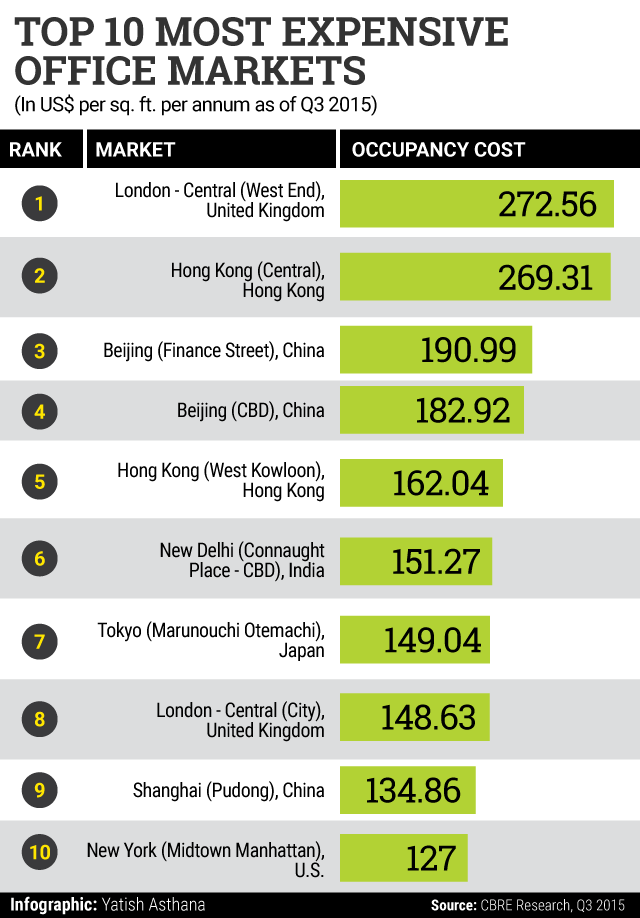 Anshuman Magazine, chairman and managing director, CBRE South Asia, said ranking for Mumbai’s BKC fell due to a marginal decline in costs such as property tax and service charges, even as overall rents mostly remained stable. For Nariman Point, rents and other real estate cost indicators were mostly stable but its ranking fell due to a relative improvement in the ranking of other global markets.

CBRE tracks occupancy costs for prime office space in 126 markets around the globe. Of the top 50 most expensive markets, Asia Pacific had the most number of markets featured, with 20 markets ranked.

It said that prime occupancy costs—which reflect rent, local taxes and service charges—increased at a 2.4 per cent annual pace globally, as the world economy continued to gradually improve and the service sector, a key bellwether for prime office space, entered its fourth year of expansion, driving healthy demand for space in top-quality properties.

Prime occupancy costs in Asia Pacific increased 1.9 per cent year-over-year—from 1.4 per cent in the first quarter of 2015—compared to 3.1 per cent growth in the Americas and 2.2 per cent in Europe, Middle East and Africa.

“Despite the fact that some markets have been hit by the China oil and commodities slowdowns, we expect that most advanced economies will keep growing in 2016 and 2017, which combined with limited availability and relatively muted development levels, will result in moderate 2-3 per cent cost increases,” he added.