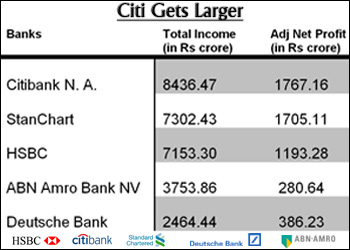 Standard Chartered may still be the largest foreign bank in India given the number of branches, but Citibank has taken the wind out of the British bank in terms of financial performance. Data on foreign banks is not readily available as they are not listed companies but VC Circle fished out some numbers of the last two years.

The numbers speak for themselves. Vikram Pandit led Citibank, which was neck and neck with StanChart in terms of total revenues, has clearly overtaken StanChart as the largest foreign bank in the country during FY08.

Citibank's interest income component is higher compared to the others even as "other income" for both Citi and StanChart rose by about the same $500 million. In fact, HSBC also overtook StanChart in terms of interest income earned last year even though other income ensured StanChart was marginally ahead of HSBC in total income generation.

We also took a look at the financials of five large foreign banks for whom we could get the data -- Citibank, StanChart, HSBC, Deutsche Bank and ABN Amro. The total income of these five banks rose 36% to hit the $7 billion (Rs 29,110 crore) mark for FY08. Within this pack, Deutsche Bank, Citibank and HSBC led the growth.

Adjusted net profit for the five banks rose 44.5% to touch $1.3 billion (Rs 5,332 crore), with Citi and Deutsche Bank being the clear leaders growing their profits by 97% and 78% respectively. While ABN's profit declined 26 percent, StanChart managed 25% profit growth and HSBC churned out 44% growth in bottomline.

If we look deeper inside Citi's accounts, it did particularly well in expanding its corporate banking and revenues from treasury operations both of which doubled last year. For StanChart, while treasury revenues clocked almost 75% growth, rest of the business could not match up with Citi's performance.