India Inc’s bosses pocketed big cheques for the last financial year thanks to parting or retiring executives cashing in their stock options, so much so that the ten highest-paid people received a staggering Rs 1,028 crore ($140 million) in total compensation.

This is almost double the total remuneration of the top earners in publicly listed Indian companies in the recent past.

To be sure, much of this increase in the total remuneration for 2018-19 is because of stock options granted earlier and cashed in by Larsen & Toubro Ltd group chairman AM Naik and former HDFC Bank deputy managing director Paresh Sukhtankar.

This steep hike is due also to the one-time jump in cash fees paid to Ravi Jhunjhunwala, the boss of graphite electrodes maker HEG Ltd, and the spike in the salary of outgoing Sun TV Network executive director K Vijaykumar. 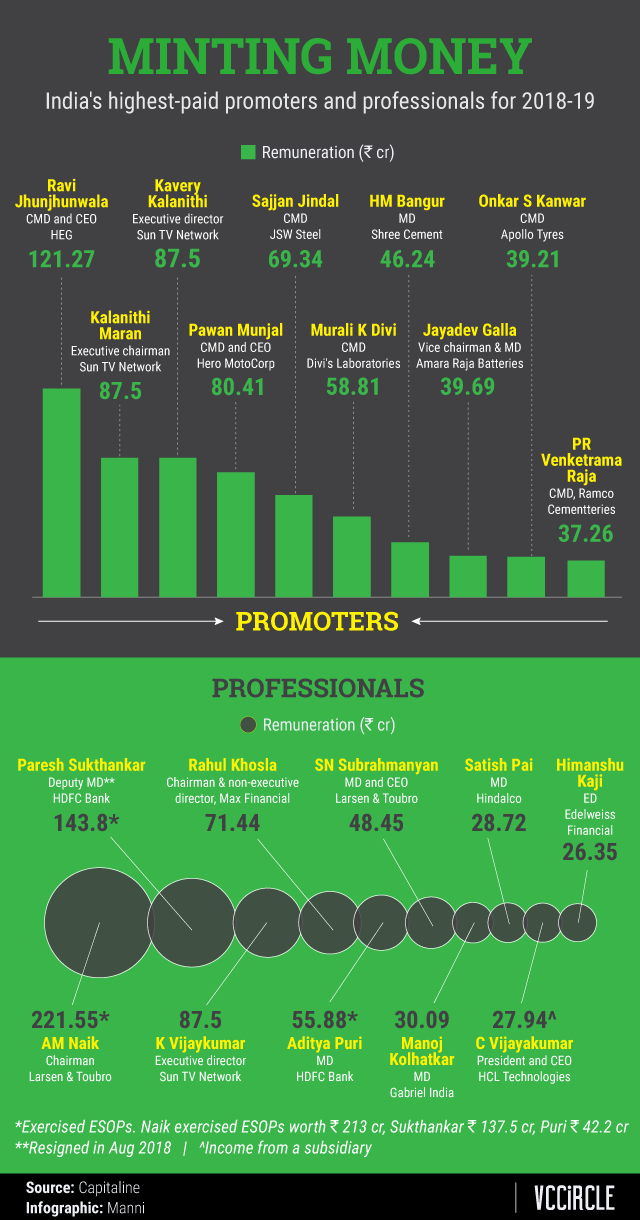 Historically, the list of the best-paid executives has been populated largely by promoters, as they get a percentage of the profit generated by the companies. But in 2018-19, half the spots in the top-20 club were taken up by non-promoter professional managers.

Naik, who has given up an executive position but remains group chairman of L&T, still holds stock options and shares of the company and cashed in the highest amount ever by a professional in the country.

To be sure, overseas corporate professionals of Indian origin like former SoftBank executive Nikesh Arora and others have pulled in much bigger pay cheques in the past.

In the recent past, Tech Mahindra Ltd’s CP Gurnani and former chief Vineet Nayyar besides Naik himself had pulled out close to Rs 130-150 crore to top the list of best-paid executives. Much of this had to do with encashment of stock options. But Naik, who held the record of highest-ever cash pay cheque till HEG’s Jhunjhunwala broke it last year, outdid himself for overall compensation by setting a new record with Rs 221 crore.

Among those who got hefty hikes after Jhunjhunwala include Divi’s Laboratories Ltd’s Murali K. Divi and JSW Steel Ltd’s Sajjan Jindal.

While Apollo Tyres Ltd’s Onkar S. Kanwar made it to the list even after taking a cut of nearly 13% in his remuneration, his son Neeraj Kanwar was not too far behind.

The other professional who took a pay cut was HCL Technologies Ltd CEO C Vijayakumar.

This list only covers directors of publicly listed companies. Indeed, many private companies, especially large multinational firms and especially big PE firms, pay hefty compensation to local heads. But top management compensation data are not available for all privately held firms as some of the firms pay via foreign domiciled entities.