The Narendra Modi government’s expectation that at least a third of the black money in circulation will get extinguished post demonetization is not likely to fructify. According to the Reserve Bank of India, Rs 11.55 lakh crore, or almost 76% of demonetized currency, had found its way into the system till December 7. A month ago, the government had demonetized Rs 500 and Rs 1000 currency notes amounting to 86% of the total money in circulation by value.

A significant amount of the Rs 11.55 crore that has wormed its way into the banks is alleged to have been laundered. Finance minister Arun Jaitley has said that incidents of laundering will be investigated. Meanwhile, income tax and police authorities have already begun their raids and various news reports suggest that crores of unaccounted money, even in new Rs 500 and Rs 2000 notes, has been seized from across the country.

While not all raids may have been reported, from the information available in public domain, it appears that since 8 November, income tax (IT) and police sleuths have seized currency notes worth almost Rs. 245 crore at last count, of which, more than half have reportedly been in new currency notes.

Once the December 30 deadline for depositing old currency notes gets over, the IT department will have a mammoth task of investigating large sums of amounts deposited across saving as well as Jan-Dhan accounts across the country.

The Reserve Bank of India data released in March this year shows that banks in India have more than 144 crore deposit accounts (including term deposits and the Jan-Dhan accounts). Of these, 117 crore are savings accounts. 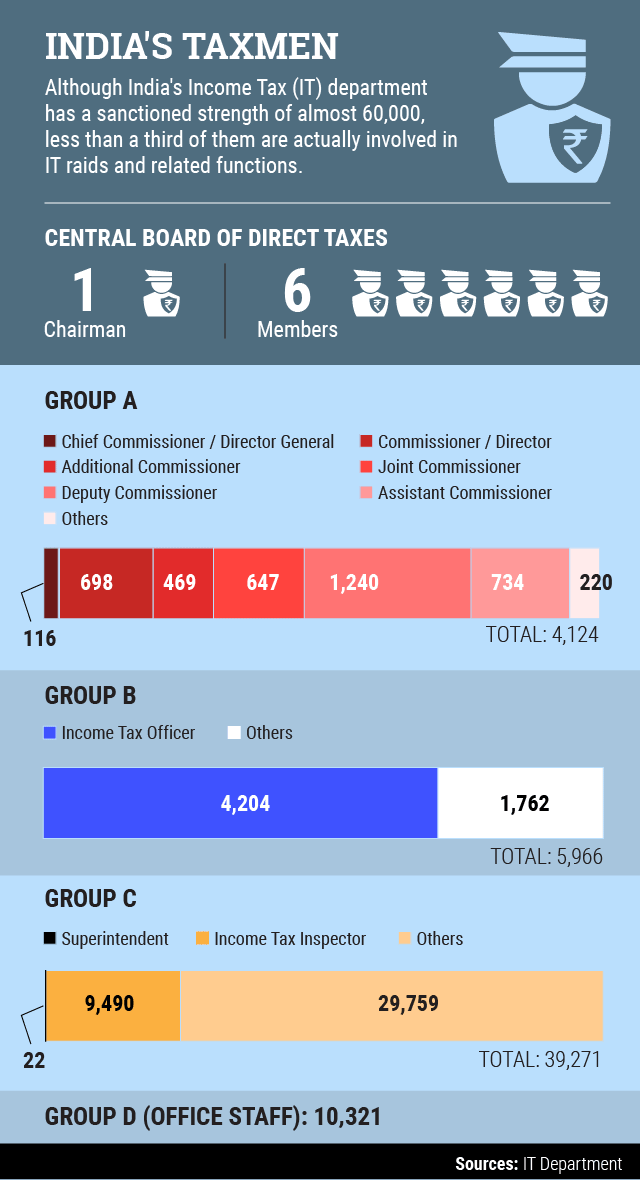 So, how many IT sleuths does India have?

Taxmen broadly deal with two types of taxation- direct and indirect. Here, we are only looking at those taxmen who deal with direct taxation.

The apex body for the IT department in the country is the Central Board of Direct Taxes (CBDT), which comprises a chairman and six members, who report to the revenue department of the union finance ministry.

Figures available on the website of the IT department show that although it has a sanctioned strength of close to 60,000 people, the number actually involved in direct function of taxation is less than a third.

Figures show senior ‘Group A’ officers make up less than 7% of the department’s total strength. These officers are drawn primarily from the Indian Revenue Service, and are either directly recruited into the service or promoted into it after a few years.

More than 70% of the almost 6000 people in the ‘Group B’ grade are income tax officers while superintendents and income tax inspectors make up less than a fourth of all the ‘Group C’ ranks.

More than a sixth of the department’s sanctioned strength is in the ‘Group D’ ranks, but these people are mainly into support functions.

Overall, therefore, it appears that no more than 18,000 officers out of the sanctioned strength of 60,000 have a direct or indirect involvement in the department’s primary functions. These officers are spread out across the country in field and zonal offices.

Even if one assumes that 18000 IT officials are actually involved in assessment, scrutiny and investigations, it would mean, that on average, each officer will have to, theoretically, at least, assess as many as 80,000 accounts and on the face of it, this makes the task of investigating money laundered in savings accounts extremely challenging.