Cautiously optimistic for a rate cut

In an expected move, the RBI prudently stayed off from any policy rate cuts, hinting at a calibrated series of rate cuts once the growthinflation dynamics provides the headroom. Even as we pencil in a 25 bps rate cut in January, we would revisit our call closer to the policy date. The present risks to inflation are likely to continue which precludes any rate-cut cycle as a foregone conclusion. A surprising feature of the policy release was the absence of any reference to fiscal issues and the consequent repercussions on monetary policy.

Ample reasons for a pause in January

The risks that are present in the current scenario on growth-inflation dynamics are unlikely to disappear in January. Specifically, we believe that (1) the fiscal situation is not likely to improve much, (2) pressures from the trade side is expected to continue and (3) upside risks to inflation exist from (a) increase in global commodity prices due to increasing global liquidity and (b) INR depreciation. Retail inflation continues to remain high and the RBI acknowledged that the nonfood component of retail inflation has been suggestive of ’persistent inflationary pressures‘. While global growth indicators point to some degree of modest recovery, the risks are significant to the US and Euro area given the ’political economy considerations that could impede, delay or erode resolute policy action‘. Further, there could be some upside in the global commodity prices as liquidity infusion is likely to remain strong.

Having acknowledged the risks for a rate cut, we also need to consider that January could provide the right opportunity to cut rates. Post the December inflation print, the trajectory is expected to be on a downward trend given (1) positive base effects, (2) likely lower food prices and (3) global commodity prices (till now) staying under control. The momentum indicator of inflation also shows a softening trend (see Exhibit 1). Our calculations indicate that the CPI headline inflation may also see some easing in December and January if food articles prices come off from current levels (~50% weight in index). The RBI also noted that ’excess capacity in some sectors is working towards moderating core inflation‘.

Surprisingly, guidance does not mention domestic fiscal situation at all

We were surprised that the RBI made no reference to the fiscal issues and chose not to keep up with the rhetoric of fiscal consolidation. In providing an outlook, though, the RBI acknowledged that ’the recent policy initiatives by the Government and further reforms should help to boost business sentiment and improve the investment climate‘. This could probably imply that even as the fiscal concerns continue, the RBI could be looking at the Government to contain the deficit at 5.3%, much lower than most estimates in the market. Thus, the fiscal issues could take a backseat for the moment as RBI monitors the growth-inflation dynamics and attempts to shore up GDP growth closer to the potential levels of ~6.5-7%.

Our assessment of the growth-inflation dynamics conditions us to pencil in a 25 bps of repo rate cut for January 29. However, we will continue to monitor the inflation dynamics, especially the retail inflation and revisit our call closer to the monetary policy date. For now, we also stick to our expectation of a 100 bps cut in repo rate in CY2013, of which 50 bps is likely to be delivered in 4QFY13. 10-year benchmark G-Sec yield till end-FY2013 is expected in a range of 8.0-8.2% and will depend heavily on the use of OMO by the RBI. 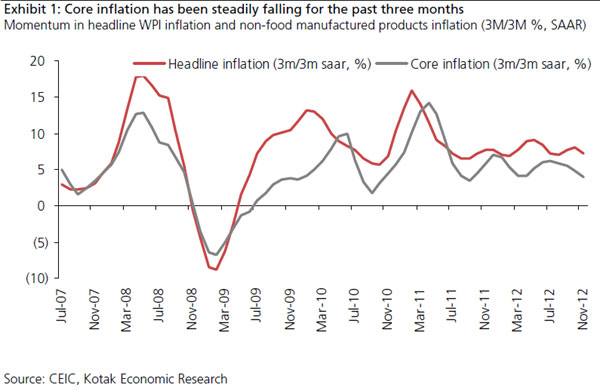