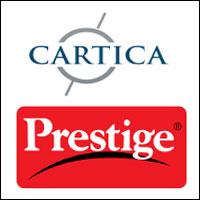 Emerging markets-focused investment firm Cartica Capital is doubling its stake in TTK Prestige, the flagship of southern India-based TT Krishnamachari group of companies. Cartica has picked up 3.08 per cent stake from the markets for Rs 124.25 crore on Monday. The stake was bought from promoters of the company, who held 74.96 per cent stake as of March 2013.

The transaction comes after Cartica Capital, set up by former IFC (International Finance Corporation) executives, agreed to invest Rs 106.5 crore in TTK Prestige last week through a preferential allotment. However, the allotment process is yet to be completed.

With this investment, Cartica Capital’s total investment in TTK Prestige will increase to Rs 231 crore or $41 million, making it the largest private equity investment in the home appliances sector.

On Monday, Cartica picked up 350,000 shares in the Bangalore-based company for Rs 3,550 each on the BSE, an identical price at which the preferential allotment was made. Shares of TTK Prestige were trading at Rs 3,473.50 a unit, down 0.42 per cent on Tuesday morning.

With the current stake purchase, Cartica’s stake in TTK Prestige will go up to 5.68 per cent (after the preferential allotment is completed), making it, by far, the largest non-promoter shareholder in the company.

Ambit Capital and Inga Capital are the advisors to TTK Prestige in the twin transaction.

Cartica was set up in 2008 by former executives of IFC, the World Bank arm, and focuses on public companies. It manages money for large US pensions like Calpers and the State of Wisconsin Investment Board.

In India, Cartica has mainly invested in financial services companies such as Ratnakar Bank and Mahindra & Mahindra Financial Services.

A part of the TTK Group, which has interests in contraceptives, baby care and other products, TTK Prestige is one of the top small kitchen appliances firms in the country. It ended FY13 with 23 per cent increase in revenues to Rs 1,358 crore and 17.4 per cent rise in net profit to Rs 133 crore. Its revenues have grown over threefold in the past four years and net profit has grown over five times in the same period.

“TTK’s brand, Prestige, is one of the strongest in the kitchen equipment space, with a market share of around 30 per cent in the domestic pressure cooker segment. TTK has a diverse presence in the kitchen equipment portfolio, which includes cookware, appliances, gas stoves and modular kitchens. Pressure cookers and cookware constitute around 55 per cent of TTK’s total sales while kitchen appliances and other products constitute the remainder,” a recent CRISIL report said about the firm.