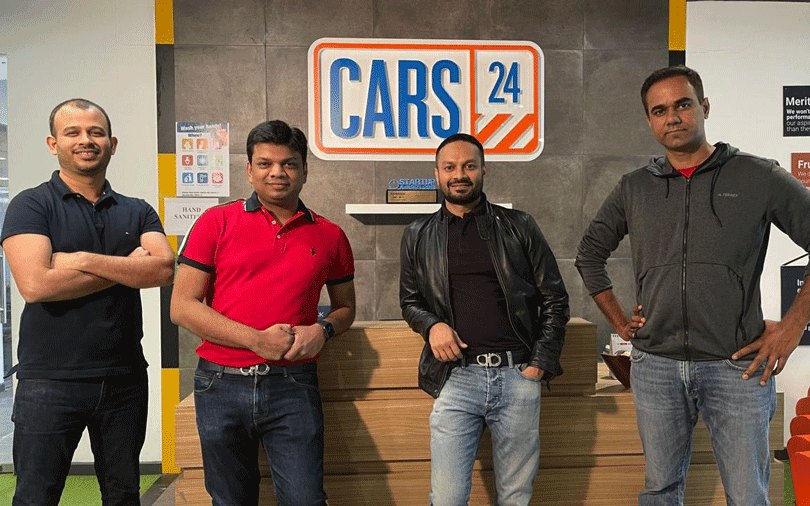 Softbank-backed used-cars marketplace, Cars24, on Monday said it has raised $400 million as a part of its latest funding round. The sum includes a $300 million Series G equity raise along with $100 million debt from diversified financial institutions.

This marks the second major raise for Cars24 this year alone, and comes just months after the company raised $340 million in Series F equity funding in September. With this round, Cars24 is now valued at $3.3 billion, almost double of the $1.84 billion valuation it was ascribed to in September.

Founded in 2015, Cars24 helps consumers buy, sell and finance used cars by leveraging technology. According to company co-founder Gajendra Jangid, Cars24 will use the proceeds from the current raise to fuel its international expansion, while ramping up its mega refurbishment labs, and accelerating its growth to gain market share.

Cars24’s refurbishment lab allows the company to test used-cars before selling them to new customers.  It plans to exit December with seven refurbishment labs in India, and looks to add more of this infrastructure in Tier 2 cities, over the next few months.

The company recently entered international markets of Australia, the UAE and Thailand, over the last six months and now plans to expand its presence across 6-7 countries in 2022. Cars24 is eyeing expansion in Saudi Arabia, as well as Indonesia and Malaysia in Southeast Asia over the next 12 months, Jangid said in an interview.

Recently, Cars24 decided to sharpen its focus on the top 100 cities in India which contribute to almost 95% of car sale volumes for the company.  It sells almost 15,000 used vehicles on its platform every month, the company confirmed.

“Only 3% of India’s population owns a car today which gives us a big headroom to grow. Having said that we want to focus and prioritise our efforts towards markets which are critical for our growth and build supply there.  We will continue investing in product and technology which will help us become more efficient and improve our customer experience.  Keeping our expansion in mind, we look to double our team size by next year with a focus on technology and product,” said Jangid in an interview with Mint.

Currently, Cars24 is clocking an annual revenue run rate (ARR) of $1 billion, driven by four-wheeler and two-wheeler vehicle sales, and its non-banking finance (NBFC) arm. It plans to double its ARR by December 2022.

Cars24 provides loans to consumers to finance vehicle purchase, with interest rates ranging from 12-14%.  The company declined to comment on the overall loan book for its NBFC arm.

“Cars24's robust competitive moats across in-house reconditioning, access to the widest assortment, and deep data science reflects in its best-in-class NPS (net promoter score). We believe this investment will help Cars24 fortify its moats even further and scale 10-fold from here over the next few years,” said Navroz Udwadia, co-founder and partner of Alpha Wave Global.

The competition in India’s used-cars retailing space is heating up, as private equity firms continue to heavily invest in the space.

This November, Cars24 rival and Tiger Global-backed Spinny also entered India’s unicorn club after raising $283 million as a part of its Series E round at a valuation of $1.8 billion.  In July, vehicle retailing platform Droom also turned unicorn after raising $200 million and was valued at $1.2 billion.

This year, even used car marketplace, CarTrade got listed on the domestic stock exchanges. In October, new and used car retailing platform, CarDekho (run by Girnar Software Pvt. Ltd.) raised $250 million as a part of its Series E fundraise, at a valuation of $1.2 billion.