Startups get some of their wishes fulfilled

A Rs 500 crore fund for women and backward class entrepreneurs, a three-year tax holiday for startups and a promise that new companies will be registered in a day were among the sops that Finance Minister Arun Jaitley held out for the startup community in his Budget 2016 speech.

Taking the government's ambitious ‘Startup India, Standup India’ programme a step ahead, Jaitley proposed a slew of initiatives to help entrepreneurs realise their dreams. However, many of these steps were outlined in Prime Minister Narendra Modi’s Standup Action Plan that was unveiled last month.

However, the Budget was silent on the exit policy and listing norms for startups. Moreover, a clear roadmap on GST implementation was not provided.

The FM has proposed 100 per cent deduction of income tax on profits for the first three years of a startup’s life. This exemption would apply for firms incorporated between April 2016 and March 2019. However, minimum alternate tax will continue to be levied on such firms.

Angel investors have long been asking for rationalisation in capital gains tax on investments in startups. The government has accepted their request, making capital gains exempt from taxation if these are invested in regulated/notified ‘Fund of Funds’. The holding period for long-term capital gains tax exemption for unlisted firms has also been lowered to two years from the earlier three years. 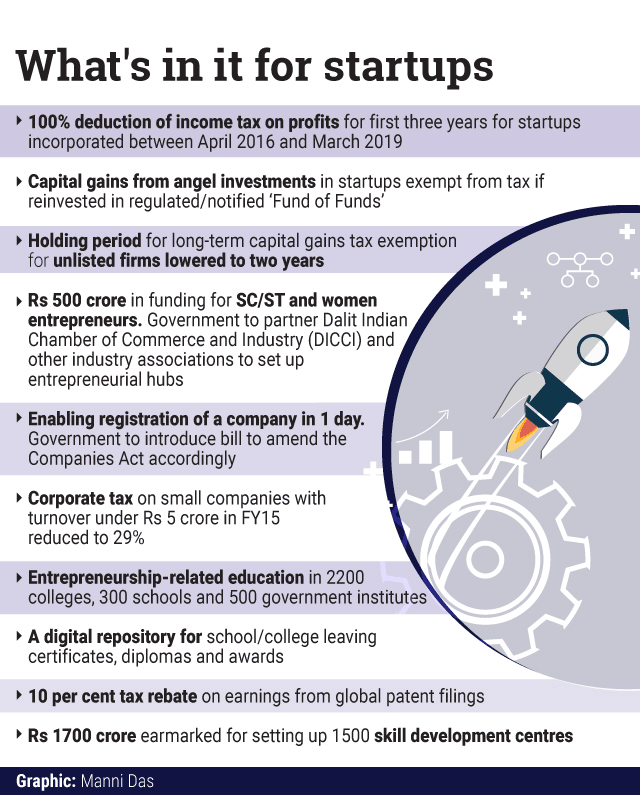 The corporate income tax rate for the next financial year for companies whose turnover was under Rs 5 crore for the financial year ended March 2015, has also been reduced to 29 per cent (from 30 per cent earlier).

Jaitley has also announced 10 per cent tax rebate on earnings from global patent filings. This could especially be helpful for tech startups and ventures working in the field of robotics and artificial intelligence. “Research is the driver of innovation and innovation provides a thrust to economic growth. I propose a special patent regime with 10 per cent rate of tax on income from worldwide exploitation of patents developed and registered in India," Jaitley said.

The Centre has proposed to earmark a Rs 500 crore fund for women entrepreneurs and entrepreneurs from the scheduled caste/ scheduled tribe (SC/ST) community. "This must become the year of entrepreneurship for SC/ST... This will benefit 2.5 lakh entrepreneurs," Jaitley said in his Budget speech. Moreover, the government will partner with Dalit Indian Chamber of Commerce and Industry (DICCI) and other industry associations to set up entrepreneurial hubs for SC/ST entrepreneurs. This hub will provide professional support to SC/ST entrepreneurs to fulfil the obligations under the Central Government Procurement Policy 2012 and adopt global best practices.

Entrepreneurs in India complain about the red-tapism and documentation work involved in setting up a company. The Budget has promised that a bill to amend the Companies Act, 2013, will be introduced in the current Budget Session of Parliament to ensure an enabling environment for startups. As a first step in this direction, registration of companies will be done in a day.

From offering education in entrepreneurship to training workers, the Budget has it all. The government intends to provide entrepreneurship education and training in 2200 colleges, 300 schools and 500 Government institutes. Also, the reach of Massive Open Online Courses (MOOC) ventures will be utilised to render training at 50 vocational training centres.

About 1,500 multi skill training institutes would be set up across the country. Around Rs 1,700 crore has been set aside for this initiative.

A digital repository will be created for all school/college leaving certificates, diplomas and awards. This could through up significant monetisation opportunities for digitisation ventures and big data startups.

The government will provide legislative backing for the Aadhar platform, with the Aadhar Bill to be introduced in the current session of the Parliament. While it will facilitate better direct transfer of subsidies, the automation of subsidy schemes and social security schemes via Aadhaar will expand the role of digital in the financial sphere, an initiative that will be beneficial for fin-tech startups.