The new government will present its first budget on July 10. The details will be keenly watched by investors both for the immediate- and medium-term path of the government’s balances, and for the government’s structural reform agenda. The budget offers the first opportunity for the new government to articulate its economic vision. In this piece, we pre-view the budget. We then look at structural reforms that could allow for medium-term fiscal consolidation. We think there are five crucial areas for investors to assess the budget –

Given the FY15 budget is applicable for 8 months only, we think the real focus should be on the medium-term path of the government’s balances. We expect the fiscal deficit to be gradually reduced to 3% of GDP by FY18E. We discuss the reforms needed to achieve this in section II below. For FY15, we think the government will target a fiscal deficit number of 4.3%, which would be somewhat higher than the interim budget number of 4.1% which we thought was overly optimistic (see India: Interim fiscal budget numbers better than expected, February 17, 2014). However, our expectation is lower than our previous expectation of 4.8% of GDP, due to higher privatization proceeds and lower subsidies.

2.Emphasis on capital spending versus subsidies

To boost growth, we think the government would need to focus more on capital spending, especially infrastructure, relative to subsidies. We therefore expect an increase in capex relative to the interim budget. The ongoing reduction in fuel subsidies will likely continue, and we expect fuel subsidy costs to come down to 0.6% of GDP in FY15E from 0.8% of GDP in FY14. The details of our budget expectations are presented in Exhibit 2. Increasing capex and reducing subsidies can boost growth without adding inflationary pressures on the economy, in our view.

We expect a greater focus on expenditure cuts in the near term, and more focus on tax revenue increases over the medium term. We think the largest increases could come on the revenue front, as we discuss in detail below. For FY15, however, we think that the previous government’s interim budget expectation on tax revenue growth, which is currently 21%, may be too optimistic, and difficult to achieve. A lower revenue number is the main reason driving our expectation of a higher fiscal deficit number for FY15.

4.Revenue increases based on increasing the tax rate or broadening the tax base

We do not expect any increases in the major tax rates in the budget for FY15. We think that any proposals to raise income tax exemption limits immediately can further reduce the narrow tax base and can be negative for fiscal consolidation. Similarly, given already high direct tax rates, we do not see the scope for an increase. Thus, any proposal to broaden the tax base, especially the income and service tax bases would be positive.

Investors will be looking for a roadmap or an announcement of key structural reform measures during the budget. These include: i) A roadmap for the GST; ii) Increase in FDI for insurance/defense; iii) Incentives to boost manufacturing growth, including reducing the cost of doing business, amendments to the land acquisition bill, and to labor laws; iv) a gradual removal of the restrictions imposed during the ‘taper tantrum’ in 2013, especially on gold imports; v) greater disinvestment proceeds from government-owned companies.

While we think it may be a tall order for the government to implement all of the above, we would look for a firm commitment on a large subset of these reforms to be announced during the budget. Otherwise, we think markets could be disappointed.

We expect an increase in FDI in insurance/defense in the budget session, incentives for manufacturing and incentives to boost financial savings. While we expect a roadmap for the GST, we do not expect it to be implemented before FY16. We also expect the government to assuage investor concerns on retrospective taxes.

Based on the above expectations, we think the budget could be positive for growth, equities, and the INR, and neutral/marginally positive for government bonds due to the medium-term consolidation path. We expect GDP growth to improve from 4.7% in FY14 to 5.5% in FY15E, and further to 6.5% in FY16E. Our equity strategists have recently increased their 12-month Nifty target to 8600. Our 3, 6, and 12m view on the INR remains 58.5, 61 and 63 respectively. We expect government bonds to remain range-bound at current levels for the remainder of 2014, with yields coming off in 2015.

The risks to the budget are higher oil and food prices, which would force an increase in government subsidies, as well as the fact that the new government has had only about 6 weeks to prepare for the budget. As such, we believe it may be somewhat difficult for it to lay out a fully-fleshed out reform agenda at the level of detail market participants may be expecting. 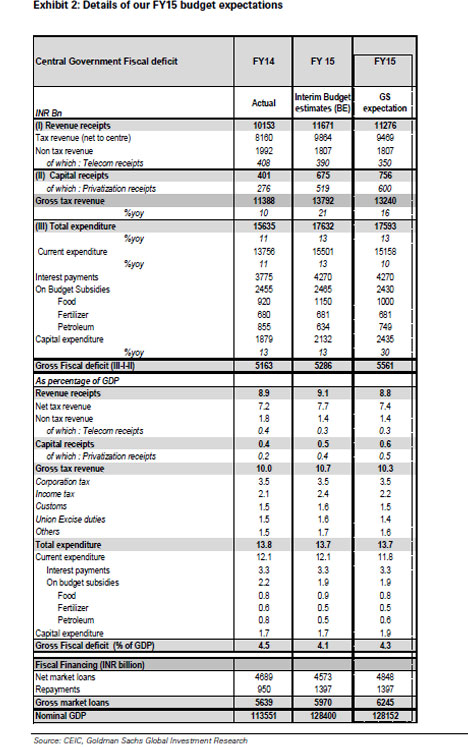 How was ChrysCapital’s exit from listed IT services firm?
TMT

Ascent Capital exits another legacy portfolio company
Markets
Despite rally, 2020 to be worst year for stocks in nearly a decade: Poll
TMT
TikTok owner ByteDance moves to shift power out of China
Finance