Brexit plus plus! Who said what on Trump winning US presidential election

The US presidential election came to a dramatic end with a shock victory for Republican Donald J Trump that has raised some apprehensions globally.

In India, Prime Minister Narendra Modi struck a friendly note by expressing hope to build ties with the US.

“We appreciate the friendship you have articulated towards India during your campaign. We look forward to working with you closely to take India-US bilateral ties to a new height,” Modi tweeted.

Kiran Mazumdar-Shaw, chairman and managing director at Biocon Ltd, tweeted: “The unexpected is happening. Looks like the next president of the US will be Donald Trump - as he said it's Brexit plus plus!”

Media entrepreneur Ronnie Screwvala said Trump and Brexit are wake-up calls for leaders. “Are you LISTENING/open to feedback or just wrapped up in your circle of rheotoric,” he tweeted. He also said that media and pundits need to do some more soul searching on getting the pulse right.

Anand Mahindra, head of the diversified Mahindra Group, tried to see light at the end of the tunnel.

We have always admired America's capacity for reinvention.Let's be optimistic that the country & its new President will reinvent themselves

Arup Roy, research director at consultancy firm Gartner, said that Indian information technology sector must brace for troubled times ahead. The US is the largest market for India's software services outsourcing sector, followed by Europe.

“The sector was already battling both cyclical challenges (due to changes and shifts in financial services, healthcare verticals) as well as secular challenges (i.e., cloud shift, automation, pricing pressure, insourcing) impacting revenue growth. A sub-10% growth for FY2017 is certain. Now with Donald Trump, administration will add to the industry’s woes,” said Roy.

However, Roy drew comfort from Trump's victory speech that had a conciliatory note. “What happens during campaigns and what actually transpires in office can vary greatly and we did get early signs of that in his victory speech,” said Roy.

Sanjiv Kaul, managing director of private equity firm ChrysCapital, said it is too early to opine on what direct impact Trump's ascendancy would have for the PE/VC community in India.

However, Kaul expects Trump to have a pro-business focus on lower taxes and fewer regulations in the US as well as its trading partners because of his business background. “My guess is India will be one of the few countries to emerge as an overall beneficiary from this development in the medium term,” he added.

Pranav Pai, founding partner at 3one4 Capital, the family fund of former Infosys finance chief TV Mohandas Pai, said a lot of lessons could be derived from the US elections particularly in reading trends that had mostly predicted a win for Democrat rival Hillary Clinton.

“One big takeaway here is that we have to be smarter in understanding real trends and behavioral patterns, and build systems that are able to cut through human biases. How we think about design, interactions, data analysis, and pattern extraction still needs a lot of improvement across the board. This is true even for the biggest products and organisations across the world,” he said.

While many corporate leaders expressed shock or concern at the outcome, a few tried to find humour in it. Haresh Chawla, partner at India Value Fund, was one of those as he pointed out to a TimesofIndia.com opinion poll that had predicted a Trump win. 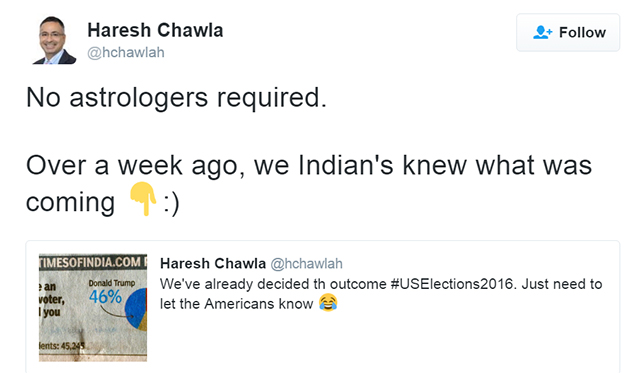