Dealmakers remained busy through the fag end of 2016 as a string of billion-dollar transactions pushed mergers & acquisitions (M&A) to a record high, even though private investors tightened their purse strings.

In particular, inbound deals where multinational firms zoomed in to acquire assets in India and a few large domestic mergers spiked the total announced value of M&As to $61.4 billion, according to VCCEdge, the data research platform of News Corp VCCircle.

This beats the previous record set in 2009 when $51 billion worth of M&As were announced. That year marked the second-biggest overseas acquisition ever by an Indian firm when Bharti Airtel snapped up the African business of Middle-East telco Zain and Abbott acquired Piramal’s domestic formulation business in multi-billion dollar transactions.

Domestic transactions, where one Indian firm announced an acquisition or a merger with a peer, dominated M&A dealmaking.

While strategic acquirers reported hectic activity in 2016, private investors in the alternative investment segment grew cautious after a record year.

The value of investments announced by private equity and venture capital firms in India almost halved after hitting a peak in 2015, according to VCCEdge. The number of such deals also declined by a fourth, reflecting the slowdown in private investments was not just due to a few companies getting less money. 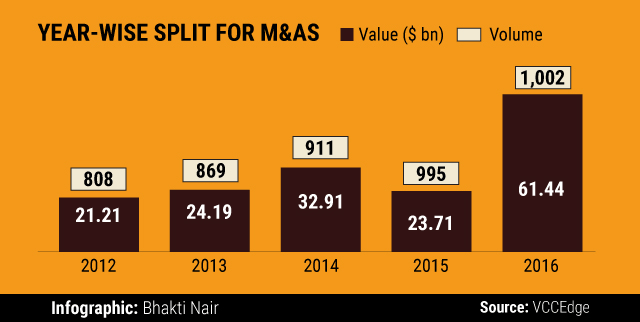 On the flip side, despite poor sentiment more than 1,000 startups got funded, as we had predicted in April.

This is less than the over 1,300 startups that got money in 2015. But the relative resilience of angel and seed-stage investors helped startups get their first cheques this year. Angel investors, too, were affected by weak investor sentiment but much less than the VCs.