BalleBaazi.com, the Dark Horse in Fantasy Gaming, Races On in the Cricket Season

It’s like enjoying a game of cricket with your friends and winning with every ball bowled, every ball over the rope, and every ball between the electric stumps. It’s the perfect combination of entertainment, skills, and money-making and the ultimate dream-come-true moment for every Indian obsessed with team sports. It’s called fantasy sports and it is the next big thing in India, a market that will engage over 100 million users in India and is pegged to be worth $33,200 million globally.

It is a sensation, only fueled by the ongoing need for amusement within the four walls. Challenging its status quo in the country is BalleBaazi.com, an online fantasy gaming platform founded by Baazi Games in 2018. It enjoyed a buoyant entry into the industry, accumulating around 5,00,000 active users in less than 12 months, 70% of whom came from Tier II and Tier III cities, showing a mystery element at work; and now BalleBaazi.com sees an existing userbase of 5 Million that is growing steadily for a positive growth curve.

BalleBaazi.com, the Dark Horse in the Indian Fantasy Gaming World

In India where everybody is a cricket expert, fantasy gaming exists as a sort of validation tool too. Users throng eSports platforms not just to play and entertain themselves, but also to put their expertise and skills to use. 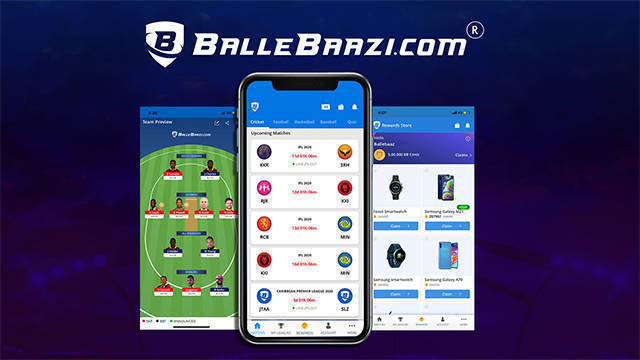 This is where BalleBaazi.com unleashes its unique platform, which rewards players for their skill and knowledge of cricket and other team sports. It also maintains a level-playing field for its users across games and activities. For example, if a player loses in a game on BalleBaazi.com, they still get the platform’s own currency, the BB Coins, which can be redeemed for exciting rewards like gadgets, vouchers, and more at the BB Rewards Store. It helps maintain the spirit of gaming and competition, parameters that take a backseat traditionally once a player has spent some time on   the platform.

In addition to cricket, players can choose between sports like Kabaddi, Basketball, Football, and Baseball to test their expertise and knowledge of the games; and if they want to up skill, they can train themselves using quizzes. The platform also offers a chance to users to play with their friends via its rewarding referral program called the Partnership Programme 2.0. Such sweet extras, including multiple fantasy formats like Batting, Bowling, Reverse, Wizard, Super Sunday and Tournament Fantasy, have enabled BalleBaazi.com to lead the roost, thanks to its willingness to experiment and improve, based on community feedback.

When it entered the fantasy cricket market in 2018, BalleBaazi.com had the advantage of being one of the first entrants in the industry when not a lot of operators had arrived. Having an empty field to play, BalleBaazi.com focused on making its games all about skill, competition, and having fun with friends. BalleBaazi.com lets its players challenge those around them and test their own knowledge of the sports. There is a bit of euphoria in playing a virtual cricket match and earning points while the real match is happening right there on another screen. Ample infrastructural support and in-game amusement make the games more challenging. Providing such a platform to a sports-obsessed nation is where Baazi Games played its trump card.

But in-game drama is not all. BalleBaazi.com had a strong capital support right from the start. It’s successful Series-A funding saw around USD 4 million being pumped from two private equity firms based out of Singapore and New Delhi. This was strategically utilized for expanding the business to the newer markets and further enhancing the gaming experience for the users while introducing more games and features. The brand also announced the legendary cricketer and World Cup hero, Yuvraj Singh as its brand ambassador because he not only shared the brand’s spirit, but also a deep connection with the audience, thus helping BalleBaazi.com reach out to a larger fantasy gaming base.

Observing a Fillip in User Engagement During the Cricket Season

BalleBaazi.com works on an engine that utilizes artificial intelligence and machine learning to improve gameplay and give a personalized experience to the users, backed by a strong tech platform. It gives more prominence to in-the-game feeling. Constant innovation and tech upgrades has made the platform capable of handling upwards of 1 million concurrent users and maintain the engagement levels for its user base of over five million registered users. Notably, it has also observed a Day-30 retention of 40% of its new users, which is significantly higher than the industry standard. Thanks to a 500% increase in the CAGR for the fiscal year 19-20, the founders of BalleBaazi.com place their hopes high and rightly so.

BalleBaazi.com is owned by Baazi Games, a disruptor that also operates online rummy and poker games in India. The parent company has also extended investments to other companies outside the RMG industry and owns a 50% stake in Casino Kart, India’s leading poker and other gaming equipment manufacturer and supplier. Furthermore, Baazi Games has also acquired a 33% stake in MADS Technologies, an innovative technology solutions provider.

Another interesting influence to BalleBaazi.com’s unparalleled growth was the lockdown period in 2020, which led to the cancellation of scheduled cricket matches globally. While people stayed indoors to protect themselves from the coronavirus and looked for unique entertainment, BalleBaazi.com worked its magic. It partnered with FanBlaze, a YouTube channel for cricket news, to give India its first-ever virtual fantasy tournament. All the league were Freerolls and to take it up a notch, sports-based quizzes along with Baseball and Basketball were also introduced on the platform to keep the users engaged; and it worked.

“Before we become a global phenomenon, our sole focus currently is to become the best indigenous online gaming platform available locally. With #PlayerFirst as our guiding principle, we plan to continue to build upon our reputation of being the go-to destination for true fantasy gaming enthusiasts in India and keep the growth rate high. We innovate and improvise every now and then and continue to provide results as expected because we understand the psyche of sports fans as we’re them. We will continue to strengthen our foothold in the Indian market with a target of growing 10x in the next 30 months,” says Navkiran Singh, Founder & CEO of Baazi Games on the plans to scale as one of the four leaders in the fantasy gaming niche in India. BalleBaazi.com has partnered with Flipkart, EaseMyTrip, and Gaana.com to maximise their audience outreach and provide users with many value-additional offers. This has helped build its capital as it prepares for the cricket season in the final quarters of 2020.

The Critical Next Phase for BalleBaazi.com

Despite its stranglehold in the space, thanks to a data-analytical approach and a state-of-the-art game engine, BalleBaazi.com is all set to raise more funding and steady the growth of its user base. With the competition focusing only on popular games, BalleBaazi.com has come out as a source of unique entertainment for all types of players and not just cricket fans. The recently launched BB Arcade feature empowers users to play multiplayer games simultaneously to take full advantage of their time on the app and win real cash, which can further help the platform boost revenue and invite investors.

BalleBaazi.com is the fastest-growing fantasy sports platform app in India and it continues to enjoy the love from its loyal users who have avoided the competitions’ lure and have instead chosen to focus on competitive gaming.

Today, one sees cricket enthusiasts obsessing over the runs scored by a player they chose in their team in an Indian Premier League (IPL) match. The player who was a dark horse; one with versatility, power, and the ability to sustain pressure. Just like BalleBaazi.com, a fantasy game facilitator for Indians who are looking at and supporting native games to fulfil the collective dream of a self-sustainable India.

Brand Solutions is a marketing initiative for sponsored posts. No Vccircle journalist was involved in the creation of this content.