As part of its neighbourhood-first foreign policy, the National Democratic Alliance government has adopted an aggressive financing approach to set up infrastructure projects in the bordering countries. A case in point being the largest overseas power project order of $1.6 billion, set to be secured by state-run Bharat Heavy Electricals Ltd (Bhel) in Bangladesh.

Competing against Chinese manufacturers, Bhel emerged as the lowest bidder, facilitated by concessional finance from the Export-Import Bank of India (Exim Bank). The exercise led by the Prime Minister’s Office (PMO) marks the culmination of India’s efforts to impress Bangladesh to allow Bhel to bid for the coal-fuelled power project.

“We have been trying to bid for this project for a long time. We finally approached the PMO to secure an attractive financial package by the government of India to bid competitively. The package provided by Exim Bank was for all Indian manufacturers including Larsen and Toubro Ltd (L&T). It will be our largest overseas order till date,” said a senior Bhel executive requesting anonymity. 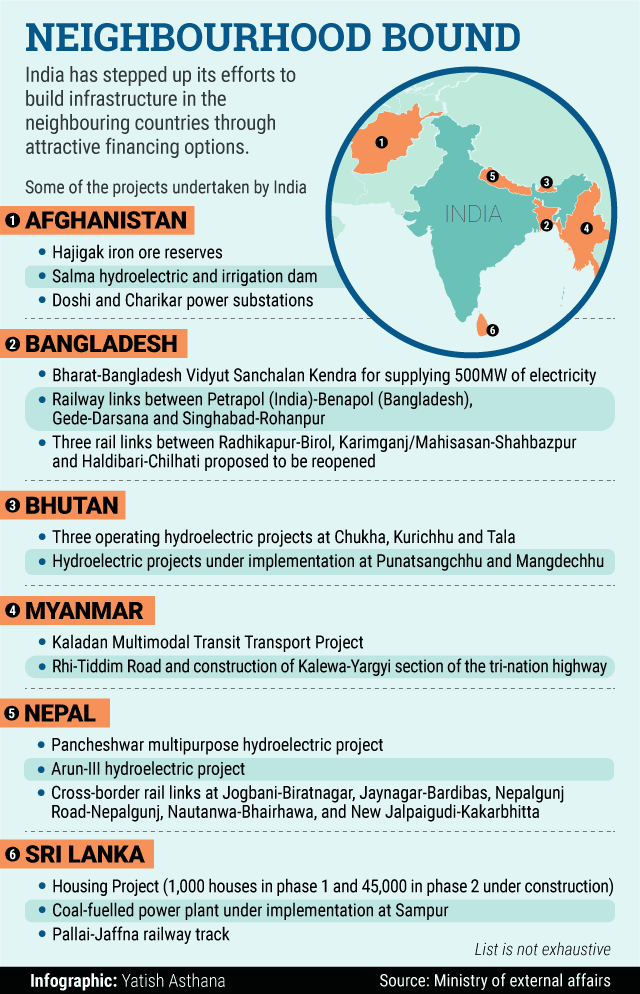 The 1,320 megawatt (MW) project is to be set up at Khulna in Bangladesh by India’s state-owned NTPC Ltd and Bangladesh Power Development Board (BPDB) in an equal joint venture (JV). The JV, named Bangladesh India Friendship Power Co. Ltd and also referred to as the Maitree (friendship) project, initially wanted to qualify only those bidders which have a 500MW operational unit overseas. While such a condition would have allowed manufacturers from China, Korea, Japan and Europe to qualify for the order, Bhel would have been disqualified given that it doesn’t have an operating 500MW unit overseas. Securing this order also removes such impediments for Bhel to compete for future international orders.

“The lowest bid we received for the 1,320MW project to be developed at Rampal in Khulna was from Bhel,” said a NTPC executive who did not want to be identified.

Mukul Sarkar, chief general manager at Exim Bank, in an emailed response said that the purpose of offering attractive financial package is to ensure that Indian suppliers win big-ticket contracts overseas which are of strategic interest to India.

“Exim Bank has been able to offer this package based on guarantee and interest equalisation support from the government of India. L&T was the other Indian bidder (apart from Bhel) to whom the same package was offered,” said Sarkar.

Under an interest equalisation scheme, the borrower does not pay the entire interest on a loan and a part of it is borne by the government.

The package offers a dollar-denominated loan for a 20-year tenure at a concessional rate of interest linked to London interbank offered rate, added Sarkar.

Terming Bhel’s successful bid as a positive development, C. Uday Bhaskar, director at Society for Policy Studies, a New Delhi-based think tank, said that the project must be executed as per the commitments, with sincerity and institutional integrity.

Bangladesh has one of the lowest per capita electricity consumption in the world at 371 kilowatt-hour (kWh), with 74% of its population having access to electricity. In comparison, India, China and developed economies have a per capita consumption of 1,010 kWh, 4,000 kWh and 15,000 kWh, respectively. Bangladesh has an installed power generation capacity of 10,283MW and the electricity generated from the Khulna project will help meet the growing demand in the country.

“Bangladesh is India’s most relevant and critical neighbour and India must demonstrate that it values the partnership,” said Bhaskar.

The Bharatiya Janata Party-led government’s neighbourhood-first foreign policy was unveiled at Modi’s swearing in ceremony on 26 May 2014 when heads of all neighbouring nations were invited.

Bhaskar recalled that the idea of infrastructure creation in India’s neighbourhood was articulated during the United Progressive Alliance's first stint at the centre but failed to reach any logical conclusion. “A decade has been lost and India should move promptly and deftly,” he added.

“Given the slowdown in the generation of capital expenditure in India and hence lack of order for equipment makers, this is an excellent development. This will also give confidence to Indian equipment makers to compete with Chinese suppliers in Africa and the Middle East,” said Debasish Mishra, senior director at Deloitte in India.