For the current year, ADB now expects China to grow 7 per cent from 7.2 per cent it projected earlier.

ADB’s latest supplement to its flagship annual economic publication, Asian Development Outlook (ADO) 2015 , released on Wednesday, projected GDP growth for the region at 6.2 per cent, down from 6.3 per cent it had projected previously.

The report pointed to the slow growth in China and industrialised economies as the main reason for the downgrade. “Slower growth in the PRC is likely to have a noticeable effect on the rest of Asia given its size and its close ‎links with other countries in the region through regional and global value chains,” said ADB chief economist Shang-Jin Wei.

Ongoing softness in the major industrialised economies (the US, Japan and Euro region) will result in a slowdown in East Asia as a whole, with growth at 6.2 per cent in 2015, down from 6.5 per cent forecast earlier, the report added.

The report highlighted that South Asia is expected to grow 7.3 per cent in 2015, up from 7.2 per cent seen earlier, with a better-than-expected economic performance in Bangladesh balancing the earthquake-related slowdown in Nepal. In 2016, growth for the sub-region is expected to expand to 7.6 per cent. 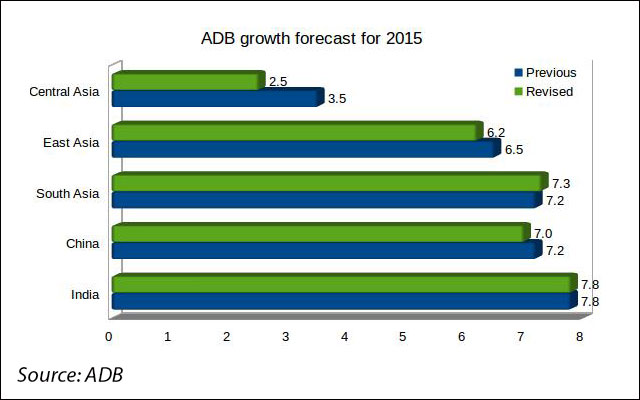 Despite loss in investor confidence, world organisations have been bullish on the Indian economy. IMF in its World Economic Outlook, released a fortnight ago, also retained India's forecast while snipping figures for global growth.

Though India is expected to be the fastest growing major economy in the world, maintaining the momentum would require the government to clear some major reforms and boost the flailing manufacturing and exports sector.