Is The Worst Over For India Inc? 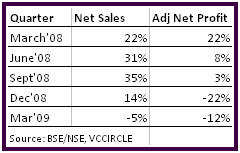 It is not just the Sensex which is showing signs of having bottomed out, corporate results also appear to suggest the worst could be over for Indian companies. VCCircle analysis of results for the fourth quarter of 2008-09 indicate bottomline performance of firms has seen the trough in the December quarter even as the firms saw both revenues and profits slip year-on-year for the first time in years.

The analysis based on results announced by 200 non financial firms (banks do not capture real demand in the economy as their interest income moves in tandem with the rate of interest) show aggregate sales declined 5%, the first time since the global credit crisis snowballed into an economic slowdown starting 2007. Moreover, net profit after factoring out extraordinary income came down 12.1%.

Drop in revenues comes as bad news for companies as it means demand is yet to revive. It also indicates that the high inflation seen in the second half of calendar year 2008 had put a froth on sales of companies which dissipated with moderating inflation in the first quarter of 2009(Q4’ FY09).

Although net profit has dropped, the extent of decline has almost halved from 21.5% decrease in Q3’ FY09. This appears to have been well factored into the surge in the stock market, which has risen around 30% over the last one quarter.

The recuperating corporate bottomline is due to as much as 27% drop in raw material cost of companies who have announced results and the slowest rise in employee compensation as also power & fuel bill over the last one year.

Cost of servicing borrowings has moderated for the second straight quarter sequentially after seeing a peak rise in interest cost in quarter ended September’08 when it rose 42.6% year-on-year. But it is still high at 33.5% (37.2% in December quarter). Given that interest costs have further come down with banks bringing down their PLR in April, interest cost will further dwindle in the quarter ending June’09.

Adjusted net profit (factoring out extraordinary items) has seen an improvement sequentially for the first time in five quarters. Although, the current rally in the market is largely due to positive global cues such as surprising results from few large financial firms in the US (who are in the midst of multi trillion sub prime crisis) and strong announcements for pump priming economies by various countries, the corporate results certainly show a resurgence in earnings which could have a positive impact on the market. If demand revives in the current quarter India could well be on its way to recovery from the global slowdown, much before other countries.

For the sake of taking out companies which ‘skew’ overall results given their sheer size,  we also looked at corporate number after excluding Reliance Industries which itself accounted for around 20% of the sample. Minus Reliance Industries, also the broader trend of slowing demand growth and improving profitability remained intact.