In late January, WhatsApp used the status feature on its application to address the confusion around data sharing with Facebook. In the coming weeks, the platform will place a banner on the top of the chat screen that will expand into two full screen text graphics to showcase the updates. 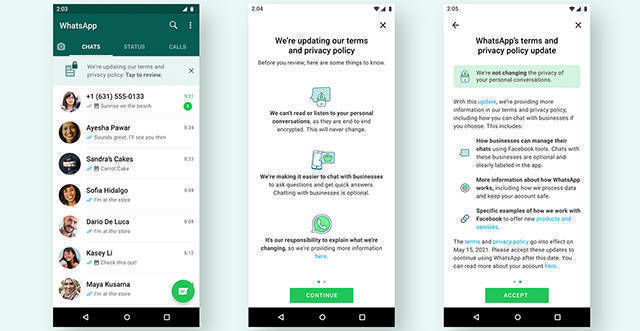 WhatsApp, through a blog post on Thursday, said that it will share updated plans, which users can read through and learn how business and private messages are handled with their different privacy standards.

According to the company, it spent the last few weeks reviewing feedback from users. It reiterated that the platform cannot read or listen to personal conversations, keep logs of who is being messaged or share contact lists with Facebook.

Facebook might come into the picture during instances where businesses need to respond to users quickly, such as an airline responding to many users at a given time, according to the messaging platform.

“These businesses may use Facebook as a technology provider to manage some of the responses on their behalf,” WhatsApp said.

“We will clearly label chats to make you aware when that happens,” it added.

The company said that while personal messages are end-to-end encrypted, messages and the data in business chats can be used for commercial purposes such as ad targeting on Facebook, while also being stored on Facebook’s servers.

The row over WhatApp’s privacy policy update has benefitted  rival messaging applications such as Telegram and Signal, which have reportedly noticed a spurt of new users. Telegram released a new feature recently to allow users to import WhatsApp’s chat history onto its platform.