What is interesting in Budget 2015: the package of fiscal, financial and monetary institution building

After the dust has settled, the interesting feature of Budget 2015 is the package of fiscal, financial and monetary institution building:

There are other elements of institution building which are relatively disconnected from this triad. E.g. the merger of FMC into SEBI is also a step towards shifting all organised financial trading into SEBI regulation, but it is not interconnected with the above three.

The three big reforms are interconnected; they require each other; they strengthen each other. This is why all three elements figure in all the expert committee reports. 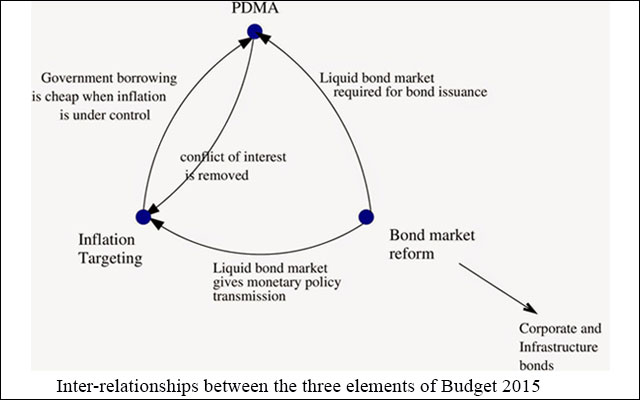 When RBI is given the responsibility of achieving low and stable inflation, this is a difficult problem for two reasons.

At present, RBI has a conflict of interest: of doing investment banking for the government. This conflict of interest is removed by setting up PDMA. This is also a good thing for bond buyers as it's safer buying bonds from a person who does not know what the next interest rate decision will be.

When the PDMA tries to sell government bonds, it requires a liquid bond market. Bond market reforms are required for PDMA to get the tools for the task at hand.

For many years, each of these components was recommended by expert committees, got discussed in the run up to each budget, and not undertaken. This is partly because each of these components, if viewed in isolation, is more difficult. Budget 2015 was able to break the gridlock by doing all three in unison. The whole is greater than the sum of the parts.

There are two more respects in which this package of reforms yields gains to the economy. When RBI was doing the investment banking for government, and also controlled banking regulation, they had an incentive to get their work done without undertaking much effort, by forcing banks to buy government bonds. Once the investment banking work shifts to PDMA, we may hope that RBI will reduce the Statutory Liquidity Ratio, and thus free up greater space for banks to lend to private enterprise. This will largely benefit small and medium enterprises as this is the segment which is most dependent upon bank borrowing.

All this will play out slowly. Inflation targeting, the setting up of the PDMA, the improvements for the bond market, and the playing out of the downstream consequences: all these will take place over years. This is slow, important work. Once begun, it will take many years to play out.

The reform is incomplete in two respects. When, in the future, the full Bond-Currency-Derivatives Nexus is moved from RBI to SEBI, the effectiveness of monetary policy will be further enhanced, and RBI will become a full fledged central bank by world standards. When, in the future, the policy rate at RBI is set using a Monetary Policy Committee, this will improve upon the decisions of one person.

MoF has done a poor job of explaining what has been done and why, which has given a lot of media misinformation. Here are some questions which have swirled in the discourse.

q: Does this mean that SEBI will set the repo and reverse repo rate?

a: No, RBI will set the repo and reverse repo rate.

q: Does this mean that SEBI will control or regulate the market infrastructure through which RBI undertakes repo or reverse repo transactions, which are essential to the conduct of monetary policy?

a: SC(R)A does not apply for RBI. RBI will design, build and operate the infrastructure through which RBI will do repo or reverse repo transactions in the conduct of monetary policy. SEBI will not have any say or power over these arrangements.

q: Does this mean that SEBI is now the regulator of the money market?

a: This means that SEBI is now the regulator of all government securities. This is true regardless of their maturity. Government securities with less than one year maturity would, previously, have been termed ``money market instruments''. RBI will continue to run its own repo / reverse repo operations in the course of doing monetary policy. RBI will continue to regulate the call money market.

q: What will happen when two private parties enter into a repo transaction?

q: Why is SEBI the right regulator for government bonds?

q: There are complex interlinkages between RBI's payment system (RTGS), the settlement system for government bonds and the working of RBI repo.

q: All these changes will be disruptive.

a: The Finance Bill is written in a way that the changes do not get triggered immediately. They unfold in a phased manner, alongside the implementation work, which will take a few years.

q: Has all this been thought through and analysed with a cool head?

Not one expert committee has disagreed with any one of the three elements. The only critics are those motivated by self-interest.

(Ajay Shah is a Professor at National Institute for Public Finance and Policy, New Delhi.)