Decline in manufacturing output weighed heavy on India's industrial activity even as electricity generation rose at the fastest pace in more than a year in April, official data showed on Friday.

Early estimates of the index of industrial production (IIP) shows it declined 0.84% in the first month of the new financial year as manufacturing sector output shrank 3.13%, the fifth time in the last six months. This shows that the government's 'Make In India' plank is not yet reflecting on the ground even as the country attracts more foreign investment.

Indeed, at $55.4 billion (including $40 billion of equity inflows) India received a record foreign direct investment in the year ended March 31, 2016, as per official statistics.

As per use-based classification, the growth rates in April 2016 over April 2015 for basic goods was pegged at 4.8% and for intermediate goods it was at 3.7%. But the capital goods segment declined by 24.9% reflecting the pain in the manufacturing and industrial sector at large.

Capital goods output is seen as a lead indicator for demand for machinery and hence the outlook for manufacturing sector. Poor data related to capital goods and manufacturing in particular depicts the challenges in the industrial activity in India. 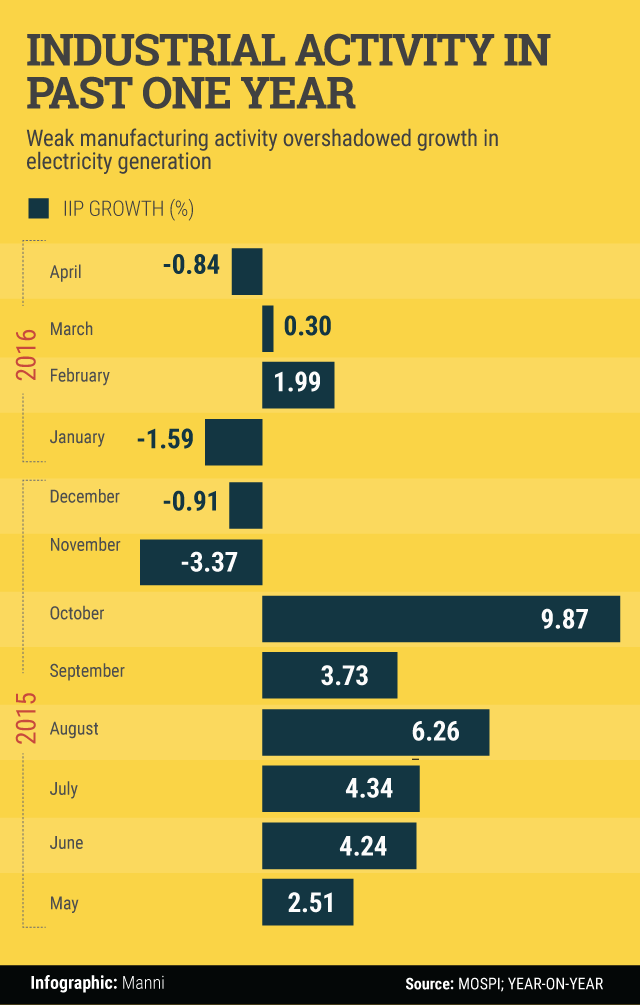 Ironically, this adds to the disconnect between government's own GDP data that pitch forked India to have recorded 7.6% GDP growth in 2015-16- the fastest pace among major world economies- and the high frequency economic data. According to this data, released two weeks ago, manufacturing sector grew by a healthy 9.3% in the three months to March 31, 2016.

The cumulative growth of IIP for the period April-March 2015-16 over the corresponding period of the previous year was pegged at 2.4%.

Meanwhile, while the mining sector index grew 1.4%, the electricity output index rose by a spiffy 14.6% in April. The cumulative growth in these two sectors during April-March 2015-16 over the corresponding period of 2014-15 was pegged at 2.2% and 5.7%, respectively.

This shows the momentum in electricity sector is gaining strength. This can partly be attributed to the government UDAY scheme under which it is restructuring the debt laden, loss making state electricity boards.

In terms of industries, nine out of the 22 industry groups in the manufacturing sector have shown negative growth during the month of April 2016 as compared to the corresponding month of the previous year. The industry group ‘electrical machinery & apparatus n.e.c.’ reported the biggest decline (-) 55.9%, followed by (-) 24.5% in ‘food products and beverages’ and (-) 17.6% in ‘tobacco products’.

On the other hand, the industry group ‘furniture; manufacturing n.e.c’ has shown the highest growth of 28% followed by 18.8% in ‘radio, TV and communication equipment & apparatus’ and 18.7% in ‘office, accounting & computing machinery’.